According to my dad, my mother has the house torn apart, cleaning every little nook and cranny. In the process, she is uncovering tons of crap that apparently would have been lost to time had this deep clean not occurred. Last week, when he came over to Ames to pick up my mom's computer from Best Buy (after a couple of months, it STILL wasn't ready), he showed up at my door and announced that he was going to start clearing weeds in the backyard. More about that in a blog post later this week, but he brought some stuff my mom had found that she thought I might want. That or she was just trying to transfer some of the tonnage from their house to mine.

I mentioned in my Toni Childs post how, during high school, I had "tape needs." Well, I think that all of these were tape needs at one point or another. 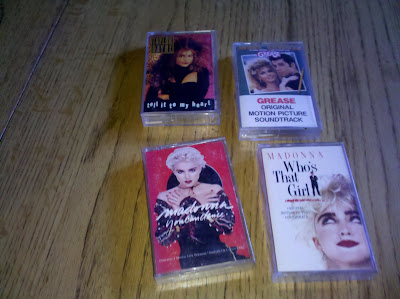 Now what in the world am I going to do with cassette tapes in the day and age of mp3s and iPods? I wondered the same thing (after I got over the excitement of seeing them again.) I mean, how awesome is it that it's the ORIGINAL cover of Taylor Dayne's Tell It To My Heart? I tell you, I totally loved that album. I remember buying it on the Carroll High Jazz Band's trip to State in 1988. Everyone mocked me for buying it, but those hypocrites were probably dancing their asses off to "Tell It To My Heart" at 80s night at their favorite college bar not 5 years later, so the joke's on them. And the two Madonna ones? You know, they were the only two Madonna albums I ever bought on cassette. Everything before You Can Dance and Who's That Girl I bought on vinyl and everything post-Like A Prayer, I bought on CD. And the Grease soundtrack? Shit, that was probably the most purchased album in our house during my childhood and adolescence. That sucker didn't sell 28 million copies worldwide for no reason.

So back to the original question, what am I going to do with cassette tapes in 2010? Well, my truck has only a cassette player. I usually hook my iPod up to it via a cassette adapter, but I put all four of those tapes out in my truck. We listened to Tell It To My Heart this morning when I took Anna to school, leading her to say "Dad, she sounds kinda like Cher." And she kinda does.

Here's my favorite song from that album and what you might hear coming from the open windows of my truck in for the next few days.