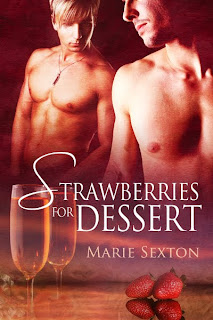 Full disclosure: The author of this book is a family friend and all around cool person.

I'm not sure why I'm still calling this the Year of 25 Books. It's becoming painfully obvious to me that I'm going to fall short of my goal. Oh well, there's always next year. Until December 31st, we're going to see how close I can get. I have two books I've finished but haven't blogged and my vacation is only half over so who knows.

In honor of Heidi's road trip with her friend and fellow m/m author Marie Sexton, which has been dubbed Heidi and Marie's Excellent Manlove Adventure (or HAMEMA for short), I decided to pick up her most recent book, Strawberries for Dessert. Heidi had raved about it and I'd seen the paperback sitting around the house for so long that I figured why the hell not? It's the first m/m book I've read in a while that was not written by my wife. I always like to see how other authors approach this genre because there are as many ways to tell these stories as there are authors out there. Some are very good and others are pure crap. Fortunately, Strawberries for Dessert is one of the former and I'm not just saying that because I know Marie will be reading this!

Strawberries for Dessert features two very real main characters that couldn't be more different. Jon Ketcher is a career driven, Type A personality guy that let his last serious relationship wither and die. While not a man's man in the traditional sense, he's definitely more of one than Cole Fenton who is flamboyantly out there in ways that make Jon very uncomfortable. They're set up on a blind date by mutual friends and it doesn't go well. Jon's cell phone keeps ringing at dinner and what's worse, Cole is embarrassing to Jonathan. Normally, this would be the end of it, but they give it another try despite Cole not being Jon's "type."

I would offer this book up as evidence to those that argue that all m/m fiction is thinly veiled porn. There is excellent character development in not just Cole and Jon but also in secondary characters, most notably Jon's widowed father. Some characters we don't see enough of for them to get beyond stock, but it's really okay. It doesn't detract from the enjoyment of the book. Additionally, the sex in this book is not very graphic so those that usually shy away from books like this due to the sexual content will find this more their speed. There is sex, no doubt (moreso than in Libby Drew's State of Mind which I also really enjoyed) but I would classify it as more the sensual type.

As usual, my litmus test for these kinds of books is whether or not the guys really act like guys. Nothing annoys me more than seeing the men in these books NOT acting like men. Fortunately, Sexton knows her way around these characters and makes them both very emotionally honest to the levels where I would expect them. Sometimes, Jon and Cole are as dumb as mud posts, especially when it comes to their relationship. However, it fits in because the set up is so good. The behavior naturally flows from the set up to the conclusion. In the end, it all makes sense.

You can do it! One book every week and half. It's only slightly more aggressive than your two books a month original plan.

That's true, I only have 9 left to read and there are 11 weeks left. I better get cracking!