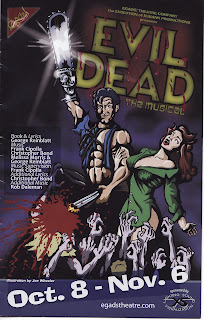 Horror and comedy frequently go hand in hand. The Nightmare on Elm Street sequels prove this beyond a shadow of a doubt. But the combination of horror, comedy and musical theater is a little bit rarer of a bird. Over the weekend I got a chance to finally see Evil Dead: The Musical at Kansas City's Off Center Theater with my friend Jason who had traveled from Boston to Kansas City for a conference. I'm not really sure where to start with this musical except that it was funny and campy as well as being a complete gross-out. So in other words, it was a total win.

Evil Dead: The Musical is based on the Sam Raimi films Evil Dead and Evil Dead 2: Dead by Dawn. Both films deal with the summoning of demons by reading from the Necronomicon Ex-Mortis or The Book of the Dead. The musical cherry picks the best parts from each of the movies and creates its own plot line, punctuated by Broadway style show tunes that are as funny as they are profane. The five college students on their way to an old abandoned cabin in the woods have NO idea what what awaits them.

In addition to singing and dancing and very bad puns, there is a shit-ton of fake stage blood that gets used during this show. And not content to just let the players participate in the fun of being covered in blood and gore, each production of Evil Dead: The Musical designates the first several rows of the audience as the "splatter zone." Sit there at your own peril, because as the program said, they will do everything in their power to make sure that they get the blood on you. For the show we went to, there was a row of folding chairs right up by the stage and then the first 2 rows of permanent seating were covered in trash bags. I had heard about this and Jason and I both decided it would be better to NOT sit in the splatter zone. Unfortunately, I heard about the splatter zone AFTER I had ordered the tickets, so our seat in row B was clearly going to be splattered. I called the ticket office mid-September and got our seats changed to row C which they assured me would not be in the splatter zone. Well, imagine our surprise when we got there and there were trash bags over our seats. It all worked out - we talked to a manager and they seated us in house seats clear of the splatter zone (and also free of seats in front of us which is nice for two 6 foot tall people.) And it was a good thing - the people in the splatter zone were covered in blood. It looked like people had been murdered. 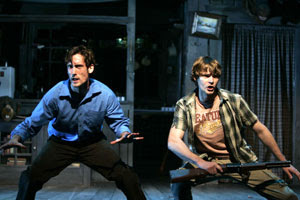 The cast was good and the songs were well sung. What I wasn't expecting was how much dancing there actually was! I'd have dropped over dead after the first number had I been in that cast. No wonder they were all in terrific shape. I was especially impressed with Sam Wright's performance as Ash - the physical stamina it must have taken for that role is a bit mind boggling. He is in virtually every scene of the show and sings in most of the songs. I was not as impressed with the guy who played Scott, which made the performance of what has always been my favorite song from the musical "What the Fuck Was That?" a bit of an anticlimax. He didn't sing it as much as he shouted it and after having listened to the cast recording of that song for the last 2 years, I was a bit let down.

We also found it very odd that the theater was in what was basically a mall, but it all worked out because we basically just hung out around Crown Center for most of the day while we waited for the show to start. It was a good venue for the show and the audience really ate it up.

The next morning, I e-mailed my friend Matt and told him that if there is ever another semi-local performance of this show, we must go. I would totally go again but this time, I think I want to sit in the splatter zone. They even had "I survived the Splatter Zone" t-shirts! I did buy a T-shirt at the show - my one souvenir from my trip to Kansas City this weekend. Here it is: 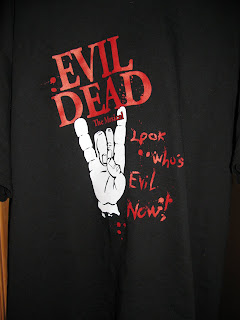 The one I really wanted had the hand making an "L" in the Evil Dead logo a la the Glee logo. The tag line was "Like Glee, only dead." The other one said "Evil Dead: The Musical - a fucking good time!" which I just didn't feel comfortable buying.

HA, great post and review, Dan. The show was really a lot of fun, and I'm grateful that we remained splatter-zone free! Though I'm sure you'd enjoy that next time if you get to see the musical again. The guy who played Ash was my definitely my favorite part! :)

Ash was definitely the highlight of the show. He played the role well with a nod to Bruce Campbell but didn't try to imitate him.

And yeah, I think I'd like to look like I'd been bludgeoned after the show the next time I see it. I'll dress appropriately. ;)