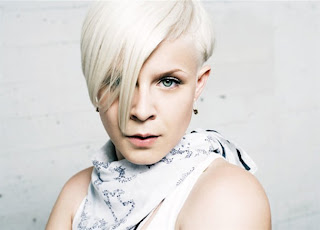 As I read all my favorite pop bloggers' year end lists, one artist keeps showing up that never had a hope or a prayer of making any of my lists. That artist is, of course, Robyn. She released an album's worth of material in three chunks over the last year - an unusual and ballsy move, I'll admit. Her songs have topped the lists of at least three blogs that I read religiously. But for me...nothing.

This is rather unusual for me. By rights, I should be all over it and Robyn should at least be in my Top 20 for the year. I looked in my iTunes library tonight to see if I actually had any Robyn songs in there and there is but one - "Show Me Love" from her 1997 album Robyn Is Here. I remember always getting that song confused with the song of the same name by Robin S, but I did kind of like it. So why can I not stomach anything else by Robyn when all these folks whose tastes I admire and respect can't get enough of her? What the hell is wrong with me?

I've watched some Robyn videos in preparation for writing this post and I think I know what it is. The music is good and right up my alley, but it's her voice that I just can't handle. It's squeaky and annoying and like nails on the chalkboard to me. It's the same reason I couldn't get into La Roux when everyone was creaming their shorts over them - the voice was so harsh I couldn't enjoy what would otherwise have been good music.

Who knows? I'm fond of saying that there's no such thing as bad music - just music that doesn't appeal to you. Even the stuff that makes me the most insane and crazy makes someone somewhere feel like I feel when I hear new Madonna or Kylie or even something more bittersweet like Mary Chapin Carpenter or Tracey Thorn. I try not to judge, but I know that Robyn, at least at this point, is just not for me. Perhaps at this time next year I'll be eating massive helpings of crow, but right now, I can't imagine it happening.

There are many Robyn songs I don't like, usually because the song itself is weird, but I would never describe her voice as squeaky. If anyone is squeaky, Kylie comes dangerously close sometimes.
But I do completely get what you are saying.
I want to like Sophie Bextor Ellis so much that I always check out her new songs. The music is usually great but I can't get past her odd voice. Same with Goldfrapp, although Rocket wasn't bad. I want to like it more than I do. There are males also. Brandon Flowers comes to mind.

Yes, Kylie does come dangerously close sometimes, but she just so KYLIE that I can forgive it.

I, too, want to like Brandon Flowers music more than I do. His solo album wasn't bad, but nothing to write home about.