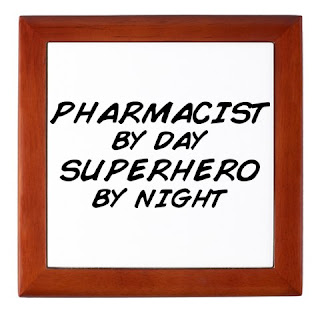 The title may be a bit melodramatic, but indulge me if you will.

We've had a trying few days around our house. Heidi's chronic pain flared up pretty badly over the weekend which saw us going to the urgent care clinic, redirected to the ER and then ultimately calling our family friend and doctor from when we lived in Washington to get some relief from what was the worst bout of pain she's had in a while. In the midst of all this, a symptom which Heidi had never exhibited prior to this weekend showed up. It started as involuntary twitching in her left leg and gradually got worse and worse until by Sunday night, she was having full body spasms. These twitches went away when she slept and could be almost "willed away" if she concentrated hard enough. But they were still undeniably there.

On Monday, we went to the physical therapist and the chiropractor. Both provided a great deal of relief, but after a few hours, the twitches were back. The chiropractor recommended following up with our regular MD, saying something about "brain stem lesions" and other such things that sent my brain which, left to its own devices will always concoct the worst case scenario, into hyperdrive. His thought was that the MD would refer us to neurology which seemed appropriate to me.

So we did just that - we visited our MD yesterday and he did just what we expected and referred us to neurology. He sent Heidi back over to the hospital for some bloodwork to rule out some of the more obvious things. I had left work to accompany her to her appointment and she sent me back to work as my presence at blood draws is not essential. I did, however, leave her in a wheelchair in the front lobby of the hospital. Jeez, what kind of husband abandons his wheelchair bound wife to go back to work? What a cad.

That was, until going back to work caused a light bulb to go on over my head.

I'll admit that I had thought of it previously, but had dismissed it. Heidi takes Effexor for the fibromyalgia-like pain that she has. She takes a mid-range dose as that's the dose where you get the effects for pain vs. the mood-elevating effects of its approved indication for treating depression and anxiety. She also takes trazodone at night, which is an old time antidepressant that we don't use anymore because the doses needed for effective treatment of depression are so sedating you end up looking like something out of The Walking Dead. However, it does have a place in treating mild insomnia which is what she'd been taking it for. She had been taking 25mg of trazodone at night, every night and had recently upped her dose to 50mg. In addition to this, she had been tweeking her dose of Effexor upward as her pain had been bad.

What's important to know is that both of these drugs affect a neurotransmitter called serotonin. What they do, in effect, is keep serotonin in the neural synapse instead of allowing it to be taken back into the neuron for reuse. This is what leads to the mood elevating effects you see with these drugs. Why the hell this works for pain is a fuck-if-I-know type thing, but it does. Sometimes, when you combine these drugs, you can get a drug interaction which leads to an excess of serotonin. Basically think Duran Duran's "Too Much Information" but instead "Too Much Serotonin."

This condition is what's known as "serotonin syndrome." When I looked up the interaction between Effexor and trazodone, I found the following:

Symptoms of the serotonin syndrome may include ... neuromuscular abnormalities such as hyperreflexia, myoclonus, tremor, rigidity, and ataxia.

It was a long shot - especially at the low dose of trazodone she was taking and there were many other symptoms she didn't have, but something easy and worth a try. I had her stop her trazodone and the doctor was already having her back her Effexor dose down to 150mg. The half life (the amount of time it takes half of the drug to be eliminated from your system) of trazodone is 3-6 hours and it's generally accepted that for a drug to completely clear your system takes 5 half-lifes. So if my theory held any water at all, about 30 hours from when she took her last dose of trazodone, her symptoms should really start abating.

We're past that point now, and her twitching is all but gone. She's gone from needing a wheelchair to get around to nearly baseline in that time. I'll never be able to prove definitively that I was right, but in my mind, I was. Nothing else changed. And as House always says, it fits. Mostly, I'm just glad that she's on the mend.

I always get ticked by the way the movies and TV portray pharmacists - you know, as nerds behind a counter without a single ounce of social skills. They are invariably balding middle age men with thick glasses that don't seem to be using their brains. Nothing could be further from the truth. I do this kind of stuff every day. Mostly, it is mundane stuff that is easy to catch and any pharmacist worth their salt will see it. But every now and then, I get something like this. And it makes all those years of fancy schooling worth every penny.

Get the point? Good. Let's dance.

Underrated, undervalued, and full of info -- go pharmacists! Glad you caught that.

That is so impressive! In fact, I'm also amazed that you were able to understand what "hyperreflexia, myoclonus, and ataxia" were, but that's all part of being a smart pharmacist, I'm sure.

By the by, I hugged my Target pharmacist today, and he didn't seem impressed.

Yes, pharmacists a majority of the time do not get the praise and recognition they deserve when they are actively working to save your life and save you grief, time, and headaches. I'm so happy that your wife is on the mend!

Dan = Rock Star! Awesome to hear that Heidi is all better now! =)

Thanks everybody. Really, I was just doing my job but I was much more personally invested in it this time around. I'm just glad she's better.