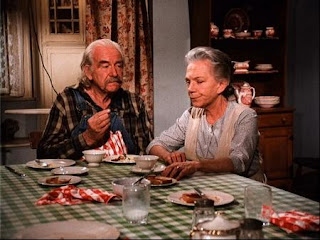 I never even liked The Waltons all that much when it was on TV. I remember my mom watching it though, and I remember the theme song quite well. I don't know why, but it just never appealed to me as a kid although I do remember watching a few episodes. As you might expect, my grandparents LOVED it. How many people our age have memories of watching this show at their grandparents' house, or at least of it being on while you were there?

I only vaguely recalled the characters of Grandma and Grandpa Walton, but let me tell you, their tweets are hilarious. Much like Heidi and me, if you're only following one of them, you're missing 50% of the show. So I tweeted the following tonight.

If you're not following @GrammaWalton, you're totally missing out.

Imagine my surprise when I got this in reply:

It cracked me up and I immediately retweeted it. My friend John saw it and said to me "I think you can retire from Twitter now." Indeed. Now that Grandma Walton has @ replied me (and compared me to John-Boy, no less), what is left to accomplish?

What I did find funny is that Grandma is Tweeting from Echofon. She has an iPhone? I wonder what the 3G reception is like on Walton's Mountain.

The Waltons was the only show my grandmother watched. She didn't even have a TV, so she came to our house to watch it. I had a serious crush on John Boy, even with the mole on his face.

Yeah, that mole WAS very disconcerting, wasn't it?

you do know that grandma walton's been dead for 12 years?