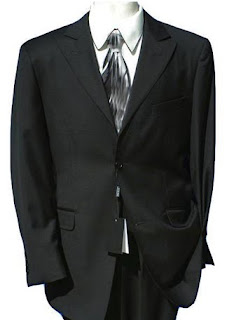 At the end of the month, my sister's getting married. Not terribly surprisingly, I am invited to the wedding. However, I'm also IN the wedding. I haven't been a proper stand-up part of a wedding in a long time - probably not since I was the best man in my brother's wedding in 2004 (not counting my own wedding in 1997, of course.) This wedding is such a cool undertaking. Not only is it wedding, but it's also a New Year's Eve party. It's also at the historic Englert Theater in downtown Iowa City. From what I have gathered, there aren't traditional groomsmen and bridesmaids either, but rather an inclusion of family and friends in an unconventional way. And to further set it apart from other weddings, the guys are NOT wearing tuxes. And there was much rejoicing. All that's required of me to wear for this wedding is a black suit. This means I'm going to have to purchase a black suit as I don't own one. So today Heidi and I went suit shopping.

I own one suit and I think I've worn it twice. Once was to a job interview and the other time might have been to a wedding - I can't recall. I always say that I would rather imbibe a quart of hemlock than have a job that requires me to wear a suit to work every day. Hell, the job I have now doesn't even require me to wear a tie. I don't know what my aversion to suits is - I imagine it has a lot to do with societal expectations which I both like to meet and don't like to meet. I don't mind wearing a suit to something like my sister's wedding, but as an item in my everyday wardrobe? Forget that shit.

We went to a local place to look and we were done before we even got started since their low-end suits started at $350. Their higher end ones went up to $899!! That's almost a thousand dollars! I can't imagine any situation in which I would spend nearly a grand on one particular outfit. So we went out to JC Penney and looked there. What we found there was much more affordable. I had a lot of different brands to choose from that looked pretty good on me. I even found, after initially resisting, that a vest really DOES make a suit look better. There was one hiccup though.

My torso and arms are just too damn long.

Even 42L suit coat was short in the arms and sadly, that was as far up as most of them went. Well, there was one 44 regular that I tried on and that one was so tightly cut in the back that I couldn't button it. Those of you who know it wasn't because I was trying to pull the damn thing over a huge beer gut. I was also reminded of why I shy away from formal dress shirts. My neck is 17 1/2" and my arms are 36/37. I found VERY few shirts with that kind of arm length. The fact of the matter is I am just freakishly tall and I guess that even at 38 years of age, I'm still a bit disproportionate. Apparently, I'm still in my "awkward phase."

I think what we're going to do is go down to Dillard's in Des Moines tomorrow and have an actual salesperson help us. I need some kind of happy medium between the budget busting suits at the downtown store vs. the do-it-yourself approach of JC Penney. I bought my last suit at Dillard's and it served me just fine.

One thing I will say is that I looked much better in a suit than I remembered - my wife reminded me of that several times while I was trying them on. Despite the fact that I was bringing out the animal in her, I still would never actively seek a job that required me to wear them daily.

Try Kohl's on your way down there. We got Charles's suit for our wedding there. He has the same arm issue, but we found something that worked, looked nice on him, and was really affordable. They always run really nutso sales, too. But Dillard's is also a good idea. Good luck!

That is so interesting that you have freakishly long arms. I have long legs but freakishly SHORT arms. I have to roll everything up. It definitely is easier to roll up than to have sleeves be too short, but it's a bummer with jackets and coats. I'm really not into having to pay to have things altered. I got a mix and match suit once with a petite jacket and regular skirt. Good luck suit shopping!