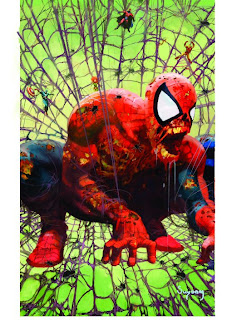 Because Heidi urged me last week to go ahead and order something that I've been wanting but, because of our always precarious money situation, have not, I purchased the Marvel Zombies hardcover from Amazon.com Sellers. I am not one that gets into comics - the closest I got growing up was a huge collection of MAD magazines from about 1981 through 1985. But, as you can reliably predict, when I found out about a zombie take on classic Marvel superheroes like Spiderman, Hulk, and Wolverine, I couldn't resist.

And it was, quite surprising, very good! I loved the fact that the zombie superheroes were not just mindless - they actually had good dialogue, was cleverly plotted. I was reading it yesterday morning while Anna was at dance, but ultimately, I had to put it away because it was too attractive to the 6 year old boys that were waiting there with their parents, and personally, I think it's too gory for that age group. Naturally, Anna found it where I had left it out on the porch and was fascinated by it.

And imagine my delight when I found out that there is going to be a prequel called Marvel Zombies: Dead Days which will chronicle how the heroes became zombies in the first place. I did some online research and found out that it is set for release on May 7th. I might have to go to the local comic store in Campustown called Mayhem - ground upon which I have never before set foot - to go and pick that up. Here's a sneak peek.

I think what makes me most excited about the prequel is that, honestly, it's the genesis of the zombies and the initial "Oh, shit! The dead are walking the earth!" that I love. There's also a Marvel Zombies sequel coming out which, admittedly, I'm not as excited about, but will probably end up picking up in hardcover like I did Marvel Zombies. It's Marvel Zombies vs. Army of Darkness and not being a huge Evil Dead series fan, it'll have to be pretty good to sustain my attention. Although I will admit the cover is intriguing!

And of course, this has made me VERY interested in the comic (although I was corrected by Heidi this morning - apparently the preferred term is graphic novel) The Walking Dead which is available from Amazon.com in hard cover (several volumes at that!) What a great gift that would make for this soon-to-be 35 year old boy! (hint hint)
Posted by Dan at 4/22/2007 11:15:00 AM

But surely superhero zombies would just be mindless automatons with the compulsion to eat brainz? Or am I missing something here? :)