Last day of work today until next Thursday, so YAY for that. It was a good day overall. But really, the best part was after work, when Heidi decided that I needed to go out to Younkers and shop for some new clothes, especially with us going to Chicago next week and going to the concert, we wanted to have something special to wear - something new and fun and not necessarily cut from the same cloth that I'm used to.

I didn't think that Younkers would be the place to break out of a clothing rut - really, it kind of caters to professional men and golfers. I know that sounds bizarre, but it really is true! But honestly, I found some pretty cool stuff. Actually, scratch that, Heidi found some pretty cool stuff for me. Well, I'll just let the pictures speak for themselves - sans glasses and with a little requisite hamming for the camera. 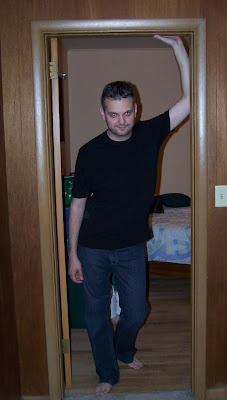 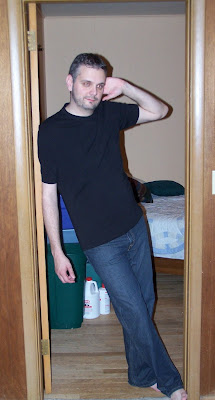 The black T-shirt is from the Claiborne for men line. And the pants - I think they're from the same line. What I love about the T-shirt is how it hugs my body - I'm so used to wearing things that are a little bit baggy because, well, I'm not as thin as I used to be. That's mostly a good thing as I was a real rail when I was in high school/college, and overall, I think I look better now, but a few too many Starbucks (and about 20 pounds of Prozac if you want to be honest about it) have left me with a bit more weight than I'd really like. But these clothes are very slimming, and I don't feel self conscious at all. It makes me want to stand up straighter, which I really need to do anyway. Tall people always want to slouch, much like in the story Memily.

I also purchased a shirt to go over the top of it for the show - and here's the results of that purchase. 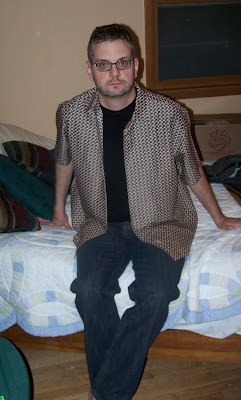 Ooh, I can't stop loving myself, as Bette Midler once said (or something like that anyway)! That's probably very vain and my Midwestern humility and solid Lutheran upbringing makes me feel guilty for looking at those pictures and thinking, dang, I look good! But it's the truth. I usually hate pictures of me, which is why I hardly ever use them as avatars - not that I think I'm unattractive, but mostly because I can't stand to look at myself on all the web sites I frequent. But I think these pictures are really good.

I'm pumped for the show, to be out on the arm of MLW (in shoes that will make her taller than me.) We've got some fun things lined up, but mostly, we're just going to enjoy being together while Mom and Dad watch Anna for a few days. Oddly, I'm not worried about how Anna will do at my parents' house, I worry more about them!
Posted by Dan at 6/07/2007 09:43:00 PM

dan you were always beautiful dammit! you can't go wrong with the classic black tee and jeans look, although it does look better on some people than others and you are one of the some (not the others!) the shirt looks very shiny so it will slip off you back easily when Heidi decides she can't wait any longer for some DanLove :P Have an amazing weekend both of you :)

Yah, congrats on treating yourself! When you feel better, so do the people around you!

Heidi's hooked you up I see! Very nice selections. Now all you need is some extensions and you'd be Rico Suave! :) (Remember never to apologize for your food, right?!)

Have fun on your adventures this weekend! Oh yeah, and Happy B'day!

Thanks everyone for your votes of confidence!!

Paul - So glad I fit in with the somes rather than the others. Will be blogging Pride and True Colors for certain!!

Anthony - thanks for commenting! Looking forward to meeting you on Sunday at the brunch.

Yuri - Rico Suave came flooding back to my brain thanks to your comment - and so did the never apologize for your food mantra. I'd forgotten it already!

YES, you discovered the secret that smaller clothes make one look thinner! People always overcompensate when it comes to baggy stuff. I love how I feel in a black tshirt (or any black shirt actually).

Oh kerpiffle at the Lutheran modesty thang - you rocked those clothes babe, not the other way around. I'm so glad y'all had a good time - Happy Belated!!