The limit of our sight

A bit of a new look tonight. Not really new, but it is blue and chilly and very winterlike, no? I also updated the blogroll and alphabetized everybody so no one can accuse me of playing favorites. Of course, Heidi is still at the top of the list because, well, that's just how it is.

Tonight, I had this huge hankering to listen to an album that I have not pulled off the shelf in probably 10 years. It's so strange when things like that happen, and it happens very frequently to me. Perhaps I should think about therapy. Or perhaps it's just an attractive little quirk. I prefer to think that it's the latter. 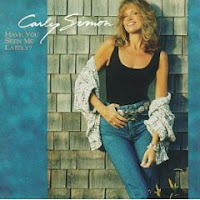 Anyway, the album in question was Carly Simon's Have You Seen Me Lately? It's from 1990, my first year of college and it was her pop/adult contemporary/soft rock follow-up to Coming Around Again, an album that is widely regarded as her comeback. I run very hot and cold on Carly Simon. She has an aggravatingly uneven track record when it comes to her music. Her albums are either completely aces or complete duds. There really is no in between for me. Coming Around Again falls in the former category, as does Letters Never Sent and Have You Seen Me Lately? Carly Simon albums in the latter category include My Romance, The Bedroom Tapes, and Spoiled Girl (double yuck to that last one.) So I'm hardly a dyed-in-the-wool Carly Simon fan. Mostly, I appreciate her.

But Have You Seen Me Lately? crept back into my consciousness for reasons I can't fully elucidate. I think, for whatever reason, I was thinking of one of my favorite lines in the last song on the album, "We Just Got Here." In the song, Carly writes that "Hugo is twisting his way up the coast." I've always liked the picture that lyric gives me. It calms Hurricane Hugo, which at the time was the costliest hurricane in U.S. history. Instead of the fury of a category 5 hurricane, I get this image of a slow, almost lazy rotation. Kind of a strange thing to think about when thinking of an album, but what can I say?

Listening to the album now, I really had forgotten how good it was, even though I distinctly recall not liking it as much as I had Coming Around Again when I first got it. I remember my friend Kelly mocking the album cover, teasing me about how Carly had definitely hired a personal trainer (probably true.) It has a very "midlife" vibe to it and considering she was 45 at the time of its release, there is probably some validity to that theory.

There are some really good songs on here, notably "Waiting At The Gate" and "Holding Me Tonight." But the song that really got me tonight was "Life Is Eternal." I remember this being one of those songs that I didn't really get at age 18, but now, at age 35, I am starting to see it. The chorus sums it up.

Life is eternal, love is immortal
And death is only the horizon.
And the horizon is nothing
Save the limit of our sight.

This is something that's important for me to bear in mind, especially in light of the events of the last few days. Not that there have been earthquakes here or anything, but let's just say that I had a figurative wake-up call from the universe today - a few of you know what I'm speaking of. Many would accuse me of reading too much into it, but the universe has odd ways of getting your attention when the conventional ways fail. I'm very fond of wiping the slate clean and starting fresh with a reboot, only to descend back into old patterns 35 years in the making. So tonight is another of those points of reboot. I'm prepared to be back here in a day or a week or a month saying exactly the same thing, but the thing is to keep on getting back on the horse.

Nice review of Carly's wonderful album, Have You Seen Me Lately. I hope you've heard her latest INTO WHITE. It's glorious. And next up is an album of Carly originals due out in May. It's supposed to be a bit Bossa Nova-ish, world music beats.

Can't wait to hear what she has to say now.

Thanks for the comment William. I haven't heard Into White, it didn't really seem to strike me, although your comment about a new album of Carly originals has me excited, expecially with the Bossa Nova/world beats influence.

There's a song about the "evening" on that new CD that is good.

A little bit of sacrilege in this post! My Romance is quite good! Listen to her version of When Your Lover Has Gone. Excellent.

I do love the title track of Have You Seen... we used to quote a goofy line "Are you gonna catch me with my hand in the jar naked singing in the choir" in college (a mouthful) and then later the line, "Don't wake me unless you love me" took on some significance I shant mention! Now I just "fall back on dreams."

My fave Carly records are Boys In The Trees, Torch, My Romance and the glorious, underrated Hello Big Man, which I bought on CD for like 50 bucks! All solid albums, along with her hits record.

OH! I forgot that Have You Seen Me Lately has a CLASSIC misheard line I also used to quote:

"Are you gonna shave me and take my toys away?"

Tell Heidi I said that! She might be amused.

OMG, the Hello Big Man CD is at the Iowa City Public Library! They are sitting on a small treasure and they don't even know it. I have a similar story of purchasing a CD for a phenomenal amount of money. I bought Dolly's Rainbow for 68 bucks off of eBay just before the mp3 revolution took off. Had I known that, I likely wouldn't have bothered.

I think my biggest problem with My Romance is that I am just not big on standards albums from pop stars. They seem so lazy to me! But perhaps I'll give it another go.