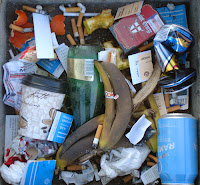 So today before work, Heidi and I went out on a hot date to Panera for breakfast. It was not exactly budgeted and in light of how the bills turned out, probably ill-advised, but what the hell, it was loads of fun. That's one of the benefits of having Anna in school full time. When I work late, we can actually do stuff like that. Just like we used to before we had kids.

Anyway, we're sitting at the table, and Heidi says to me "Oh my God, bad karma! That lady just threw the trash from her car out her window and onto the parking lot!" I couldn't believe it and nearly didn't, until we saw her do it AGAIN. Now, I firmly believe that all things you do come back at you threefold, so this lady is going to have a lot paying to do later. Heidi said that she will probably spill something on her shirt later in the day and wonder why. My thought was to take my tray full of dirty plates and cups and ask her if she would mind if I dumped it in her car. To that Heidi says "Hmm...passive aggressive much? No, wait a minute, that's just aggressive."

As it turned out, there was a table of older guys a ways down from us and they were all watching the activities unfold with the same kind of astonishment that we were. It was kind of funny how this lady probably thought she was getting away with murder, but we were all watching. Or perhaps she didn't find anything wrong with what she was doing, which is a hundred times worse.

A part of me wanted to go out and pick up the trash she had chucked out of her car and tap on her window saying "Excuse me, miss, but I think you dropped this." However, the north wind was howling today so the trash was probably half way to Ankeny by the time I thought of it.

Dude. That's insane. I totally get this and saw some schmuck do the same thing when I ate at McDonald's (way back when I used to eat that crap) and it made me want to hop on his hood and drop a deuce. It's crazy how twenty-some years ago (or more) this wouldn't have been a big deal, but now it's completely, and rightfully so, ingrained in our heads.

Also...your daughter's name is Anna? What a coincidence. If we have a girl when kid #2 shows up, that's a name we like a whole heckuva lot.

I've done that when people have dropped cigarette butts out their windows in front of me at a light. Yeah, I have been known to have anger issues.

Wait, not jumped on anybody's hood... merely politely retrieved their dropped item for them.