Minneapolis on Wednesday was not only the site of Dolly's concert. Earlier this year, quite randomly I think, Thomas aka TKT of Tappity Tappity and I found each others blogs and before too long, we were planning a blogging theme week, which evolved into Nerdery Week. It was great fun and found via the posts of that week that we were likely brothers from another mother. So since I was heading up to Minneapolis, it seemed silly to not at least try to meet up.

I have met up with various internet friends before, not tons, but a few. They have all been good experiences. As a friend of mine put it when I was telling him that about this impending meet-up, I haven't met any 70 year-old pedophiles yet, so I will count myself as lucky.

I let Thomas decide where we were going to meet up, and he picked Matt's which is a great little greasy spoon in southeast Minneapolis and home of the Jucy Lucy (a cheeseburger with the cheese IN the hamburger!) The aforementioned road construction made getting there a trick, but we were not to be deterred.

As Thomas said in his blog post, we met and it was like we had known each other for years. There were no formal introductions, although Heidi did ask me later on that night "Now, how do you know him again? Is he one of the Madonna peeps?" No, hon, as crazy as it sounds we bonded over zombies and Rose McGowan's machine gun leg. And the rest is history!

Here's some photographic evidence of the meetup, even though I didn't feel like I needed to open my eyes for the picture! 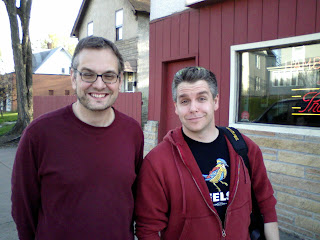 I was thinking about that one the way home. I'm like..."How did we meet up again?"

I think you're right. I must've been doing a Google search for Rose McGowan's machine gun leg and next thing you know, I was like...

Ugh. I don't photograph well. I look like a cross between Paulie Walnuts and Eddie Munster.

Let's do this again, yo.

Also, I am short.

Nah, we only grow them freakishly tall at our house. ;)