So this morning after getting an exceptional night's sleep (Heidi, I love you but there is nothing like having the whole bed to yourself every now and then), I am feeling a lot better but know that I am not 100% yet. I'm at the computer and listening to a leak of Cyndi Lauper's new record which is out this week. A lot of people presume that leaks of albums are bad, and I can see where they're coming from. It'd be easy to just not purchase the album, now that I have a leak of it. While I don't always purchase albums that I find as leaks (that being because I didn't like them), I am grateful for the leaks because it gives me a chance to listen to an album on my own terms. Having heard a leak of Donna Summer's Crayons was a contributing factor in my eventual purchase. 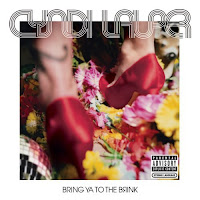 Bring Ya To The Brink is Lauper's first new album of original material in 12 years and let me tell you, it is a barnburner. Similar to Donna Summer, she could have gone all adult contemporary on us (again), but instead, she churns out some solid dance-pop that would do Madonna proud. The first single "Same Ol' Story" is already on my summer songs list (the f-bomb helps its cause immensely) and "Into The Night Life" has a chorus that is, well, orgasmic even if the verses are a bit clunky. Another early favorite for me is "Set Your Heart" which she premiered on last summer's True Colors Tour, which Heidi and I attended (and at which Debbie Harry sported a most unfortunate haircut.)

Although I am not a major fan of Lauper's (I don't think I've purchased any of her albums since 12 Deadly Cyns...and Then Some), I do appreciate her music and recognize her as having a huge voice. I didn't fully realize this until I saw her as the opening act on Cher's Farewell Tour. When the lights in the concert hall went down and she appeared belting out "Shine", it didn't matter that I didn't know the song. I knew that I was in the presence of a powerhouse voice. I think that Lauper is frequently criticized for having a bad voice, and while I can understand that it's not for everyone, her voice is not bad and she really can sing. She could have been as huge as Madonna, but I think that Madonna just knew how to market herself better, carefully sidestepping associations with pro-wrestling which I don't think Cyndi's career ever fully recovered from.

Lauper's dedication to LGBT rights is amazing to me. She pulls no punches about her support, in ways that I think Madonna would be wise to take notes on. Madonna always seems to be implicitly supportive of LGBT rights (her status as a gay icon makes it almost a requirement), but Lauper one-ups her one-time 80s rival and stomps all over her with it. I mean, seriously, will we ever see Madonna dressed up like this? 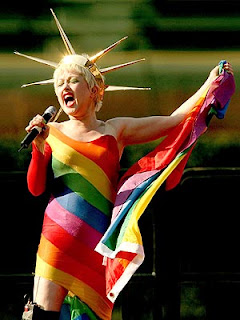 Probably not, for really, only Lauper could pull that outfit off. But I do applaud her unabashed support for the LGBT community.

So thanks to the leak of the album, I will absolutely be picking up Bring Ya To The Brink on Tuesday, and if not on Tuesday, the next week once I get my next paycheck. In the meantime, head over to iTunes (or wherever you buy your digital music) and pick up "Same Ol' Story." You won't be sorry. And then buy the album.
Posted by Dan at 5/25/2008 11:40:00 AM

Cyndi's kind of a real person compared to M's icon/empress thing. She seems like a very loving person and her voice has held up. What's best is that she took a chance on her music and it paid off.

Don't feel bad re leaks. That's the way blogs work. We all know you spend too much on music, just like the rest of us broke ass dreamers. xo

I cannot believe you got Cydni for Cher's Farewell opening act, and I got the bloody Village People!