So remember the clickety-clack sound the car was making on the way back from Heidi's dad's this weekend? We took the car in today and the verdict is that two of the four axle boots (aka CV boots) are bad. One is completely shot and leaking grease all over the place. The second is cracked badly and in danger of going out. This is what a CV boot looks like - I had never seen one before today. The one in the picture is even cracked, in honor of the ones on our car. (via) 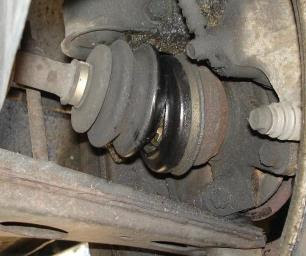 Obviously, we're going to replace this - as one place I was reading online said "That front wheel coming off at 60 MPH in traffic could ruin your whole week." But, as with most things that occur, there is a healthy dose of physics involved, even in the places you would think would be unaffected by physics.

Physics? Why yes. I'm speaking specifically about Newton's Third Law of Motion. For every force or action, there is always an equal or opposite force or reaction. Such is the case with the demise of two of my CV boots (and possibly the CV joint itself on one of them - that much I am not entirely sure of. Although from the sounds of what I've read online, yes we're getting a new CV joint.)

We have what can only be characterized as a sizeable amount of credit card debt. Some of it kind of happened to us (you do double mortgage payments for 18 months and then sell the other house at a $12,000 loss, there's going to be some financial hell to pay later) and some of it we did to ourselves. I'm not looking for sympathy or consolation - it is what it is. I have made my bed, but you know what? It's kind of lumpy and annoying so I'm doing something about it. My goal this year was to pay $5,000 on the credit card - a good sized chunk of the balance. That boiled down to around $420 a month (we have a rocking interest rate because Wells Fargo owns our souls.) I managed to do that payment in January, so YAY me! Then the CV boots went out and the bill for that?

Yep, as my father says (and his father before him), don't get money ahead or the kid gets sick. Or in this case, the car.

Heidi and I were discussing that as cars go, this one has been one of the better ones we've had. It has really not given us one little bit of trouble in the nearly 4 years we have owned it (except for air conditioning/heating stuff which wasn't that expensive to fix.) It's the first real repair we've had to do.

But yes, $420 off the credit card, $424 on. Although maybe not all of it has to go there. We'll see. But mostly I'm just glad the axle didn't completely crack apart on the way back on Saturday. Someone (still not sure who or what) was watching out for us.

I am truly feeling you on the credit card debt. Amazing how quickly you can rack it up when you have to pick up your life and move it 1200 miles to the west.

You aren't kidding there. We moved a good 5 years before we could really afford to, but in hindsight, it was worth it because I'm not sure we could sell the house we eventually sold at a loss AT ALL in this market. It all happens for a reason. And as my dad says, you really can't worry about money because ultimately, they can't throw it in on top of you when they bury you (well, they can, but it doesn't do you much good!)

The $404 for my brakes went on my credit card too. I feel for you! Try to look at it as you are still $420 ahead. My goal is to try to pay it off this month, without having to use any of my meager savings. I expect by next week, I'll be eating cat food. :) I have never heard of a CV boot-- yet another potential car repair to worry about!

This does suck...but mary is right, you are still $420 bucks ahead of where you'd be if you didn't make that payment. And do NOT charge the repairs...try to use the cash you would've used for your February payment towards the repairs.

That's probably the best advice there is - the first step to paying down the credit card is to STOP USING IT which we have, by and large, done. It is only used now for big things like this and things that we will be getting reimbursed for (i.e. visits to the dentists) and when the reimbursement check arrives, it goes right on the credit card.

We ended up charging the repairs, but once I figure out the cash flow, it's the first thing that gets paid.

I had to replace my CV boots or whatever and then I ended up ditching the car in April of last year. It was a money pit.