We took Anna into the doctor on Wednesday more just because it felt like Something We Should Do as she hadn't been to the doctor in a couple years. There were a couple of questions we wanted to ask a pediatrician and I wanted to make sure that she was growing appropriately (she is: at 4 feet, 8 and 3/4ths inches and 68 pounds, she's above the 99th percentile in height and at the 50th percentile for weight.) Before the doctor came in, Anna asked me if she had to get any shots, which I swore up and down she didn't.

Well, as it turns out, I was wrong. Hepatitis A has been added to the raft of vaccines recommended before the age of 2, and it must have been added recently because she didn't have it. Upon hearing this, she looked at me anxiously and gripped her arms, proclaiming that she didn't want it. No amount of rationalization was going to work. Eventually, Heidi promised Anna that I would take her to Lunar Golf (black-light miniature golf) at the mall if she would just relax and get the shot. She relented, but only until the nurse came in with the needle, at which point full-on freak out ensued. I really have to be patient with it though, because she comes by it naturally. When I was slightly younger than her and had cut my eye all to hell, they had to wrap me up in the paper on the exam table in order to stitch me up. 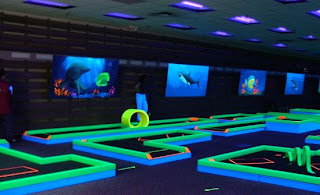 So she got the shot (but "didn't like it" as she said) and after I got off work, we headed out to the mall to Lunar Golf. It's 18 holes, 8 bucks a person, but you get to play three times. They play really fun classic rock and we always have a good time. I looked on the web site to make sure they were open and they were open till 9, so off we went. She sang "Telephone" the whole way out there, but when we got to the mall, well, "devastation" only partially describes it.

Lunar Golf was no more - completely defunct and out of business. The gates pulled down with black plastic blocking our view of the inside. Anna broke down in tears right there in the mall. I held my daughter who is 8-going-on-25 like a 4-year-old and let her sob into my shirt. I understood her pain. It was kind of "our place." We scrambled to think of something else we could do - there used to be another mini-golf place here in town, but I knew that was long since closed as well. We went back home and Heidi suggested we go to the Story City Carousel which turned out to be a good idea because it was something we hadn't done in a long time and was also pretty cheap. The whole way up to Story City, Anna wanted to take turns remembering the fun times we'd had at Lunar Golf.

I'll admit that a part of me is sad that Lunar Golf has gone the way of the dodo bird here in Ames. It was pretty fun although I never understood the people who took it seriously enough to keep score. Honestly though, it was never very busy, and I kind of thought in the back of mind that it wouldn't be long before it would be gone. We should have gone more often, but that'll probably be something that Anna tells her therapist when she's 38.

She's over it - she just told me on the phone last night that she's either giving me a scorpion or a bomb in a box for Father's Day. My incessant teasing has created a monster! I always say that I won the kid lottery and for all the times when she makes me crazy, she's better than I ever thought I'd get and likely better than I deserve.
Posted by Dan at 6/19/2010 07:42:00 PM