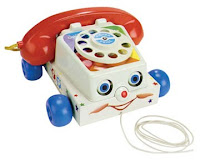 I heard it said once that it's impossible for a song about phones to be bad. I don't remember where I read this, but I do remember thinking that seemed like quite a blanket statement. Surely this can't be true. Well, as it turns out, if it's not always true, it certainly is 99% of the time. So I went through my iTunes library using the search terms "phone" and "call" just to see what I had. From those results and from some songs I already knew would make the cut, I've culled my top 8.

1) Hung Up / Madonna
The most obvious choice for this list is probably my favorite telephone song. I think my favorite part about it is the play on words that is the phrase "hung up" in that she is hung up on the guy and also "hangin' up" on him. Some of the remixes went a step further, incorporating ringing phones, dial tones and "please hang up and try again" into the song. It's classic Madonna and a song that deserves its place amongst her best-known 80s hits.

2) Telephone / Lady Gaga & Beyonce
This was the song on The Fame Monster that I never really got into. Not even its cinematic video really sold me on it. It wasn't until the folks over at NPR did their spoof of it that I really began to appreciate it. Now, one of our favorite things to do is to say "stop calling, stop calling, I don't wanna talk anymore/I left my head and my heart on the dance floor" in our best Robert Siegel.

3) Telefone (Long Distance Love Affair) / Sheena Easton
In the running for the cheesiest song on this list, it certainly has the cheesiest video. I mean, seriously? Frankenstein's Monster and Dracula? This is a quintessential "80s song" for me - right up there with early 80s classics like "Total Eclipse of the Heart," "Down Under," and "True." Say what you will about the production values on those cheesy old 80s songs - they don't make them like this any longer. I can't even imagine someone like Sheena Easton getting a chance these days.

4) I Wish The Phone Would Ring / Expose
Expose were heading toward the end of their hit-making days in 1993 (although the gag-inducing "I'll Never Get Over You (Getting Over Me)" was just around the corner), but for my money, this song tops all the hits from their brief 80s heyday. Barbra Streisand would probably put this in her "dependent victim songs" category. The song is about nothing more than waiting for that special someone to call, hatching the phone as one of my friends used to call it. Sure it's co-dependent and playing the victim, but never has it sounded like quite so much fun.

5) Callin' Baton Rouge / Garth Brooks
"Callin' Baton Rouge" also belongs on the "country songs I like so much more than I should list." As a rule, I don't like Garth Brooks much (too many college nights in bars with drunk frat guys singing along to "Friends In Low Places") but this song is a major exception. I think it's the fact that, at 2 minutes 38 seconds, it doesn't overstay its welcome and the rather awkward prepositional phrase "But until then I'll spend my money up right down to my last dime" that seal the deal. A great 90s country song.

6) Hanging On The Telephone / Blondie
I deliberately didn't pick "Call Me" which is arguably more well known but I do like this one better. While not a Blondie original, they did make it famous. My sister Wendy and I have always been fond of the line "Did she go to work or just go to the store?"

7) Ring Ring / ABBA
When word leaked that Madonna might be sampling ABBA for the kick-off single from Confessions on a Dance Floor, "Ring Ring" was high atop everyone's list of possibilities - well, everyone's list but mine since I didn't even know this song until I sought it out around that time. And forget what I said about Sheena having the cheesiest song and video on this list. I should have known that ABBA would win that, hands down.