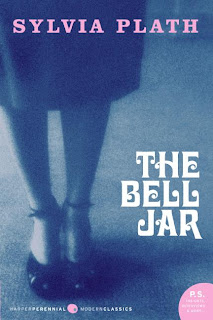 I first read Sylvia Plath's The Bell Jar when I was 15. I don't recall why I picked it up - probably because I was "supposed to." I wrote a book report on it for my 10th grade English class. Up until a few years ago, I still had it. When I was getting ready to type this post, I looked for it (a bit half-heartedly, I'll admit) but couldn't find it. I presume it's lost to the ages, but that's not altogether a bad thing. It is probably, if you'll pardon the pun, rather sophomoric. I thought I knew everything then and that everything I put on paper was perfection. Oh, how little I knew.

Anyway, I was talking to my friend Mary over Memorial Day and was saying how I'd really like to reread The Bell Jar. I remembered precious little from it apart from the fact that it involved a 20 something woman who was slowly but surely descending into mental illness. I also remember it being a rather thinly veiled autobiographical account of the author's own struggle with mental illness. Not the most uplifting of subject material, but as I so frequently say, "a little advice about feelings, don't always expect them to tickle." (credit where credit is due.)

The novel's main character, Esther Greenwood, is in New York City as the the story opens, participating in an internship for a women's magazine. But it's not until the internship ends and she arrives back home in Massachussetts that the trouble really starts. Having anticipated being accepted to another internship under the tutelage of a famous writer, she starts to lose her grip upon learning that she was rejected. This is compounded by troubles in her love life and the antagonistic relationship she has with her mother. She can't sleep and flits from one project to the next without finishing anything. Soon, her situation becomes dire, with her thoughts consumed by the idea of suicide. After a nearly successful attempt, she lands in the hospital - referred to in the book by the slightly un-PC and definitely out of date word "asylum."

The story is told from Esther's perspective, so the reader gets a good glimpse as to what depression might feel like. And that's just the thing. Esther really doesn't seem crazy or insane to me. Rather, she appears to suffer from severe clinical depression. She compares her mindset to living inside of a bell jar - a piece of lab equipment in which vacuums can be created. One of her most telling quotes comes during toward the end of the book, one I distinctly remember pulling out as the "required quote" for my 10th grade book report. In it, Esther is confronted with by the kindess of Mrs. Philomena Guinea - a successful author who was her benefactor during the summer internship and who also ends up footing the bill for her hospitalization.

I knew I should be grateful to Mrs. Guinea, only I couldn't feel a thing. If Mrs. Guinea had given me a ticket to Europe, or a round-the-world cruise, it wouldn't have made one scrap of difference to me, because wherever I sat - on the deck of a ship or at a street cafe in Paris or Bangkok - I would be sitting under the same glass bell jar, stewing in my own sour air.

We all know how Sylvia Plath's battle with the noonday demon ended - with her head in an oven while her children slept in the next room. The Bell Jar is a cautionary tale - one that was well worth the reread even though its approach to mental illness is quite dated.

One of my all time favourite books by one of my all time favourite authors (though admittedly I prefer her poetry). I think, despite the dark subject matter, there is a lot of black humour in this book. As a historical testament of treatments for mental illness in the fifties, it is a horrifying reminder of how little the medical profession understood what it was doing.