I'm 80% through my run of night shifts and hopefully I won't jinx tonight by saying that they really haven't been all that awful. As predicted, I hit my nadir on the third night (I was SO tired on Monday morning) and am actually feeling pretty good headed into the last one. I've slept pretty well for the most part as well - something that is not always easy to do. Thanks to Ativan, I slept blissfully for 6 hours today which is more sleep than I get on some nights.

But working the night shift has caused me to neglect my life. Dirty clothes are strewn all over my office, clean clothes need to be put away. I haven't read a word of the book I'm reading and have only blogged once. I did manage to get the tonnage of pop bottles and cans back to the store which netted me a massive $3.75. When that's your biggest accomplishment, you know you're in trouble. 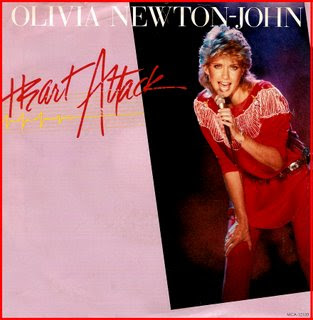 And how all this ties into "Heart Attack" I have no idea, but I listened to that song randomly this afternoon and just knew that I had to blog about it. I think it might have something to do with the fact that we sang a Cliff Richard song at UU on Sunday (I forced myself to stay awake so I could go to our minister's second-to-last service.) The more I thought about it, the more I wished that if we were going to sing a Cliff Richard song, I wish it would have been his duet with ONJ, "Suddenly", but hey, I'm not on the program committee.

I remember getting the single for "Heart Attack" without having even heard it - that's how sold on Olivia I was as a kid. If it had her name attached to it, I was sure to like it. Well, I got the single home from the store and I have to admit, I didn't really like it all that much. In fact, I liked the B-side, an album track from Physical called "Stranger's Touch" (video here, amazingly cheeseball) much better, even though the bridge-ish section in "Stranger's Touch" where sing sings "he's overpowering me/what'll I do-oo-oo, oo-oo-oo, oo-oo-oo." always made me feel kind of bad for Olivia.

But I eventually warmed to "Heart Attack" playing it no less than 12 million times as a kid which is something my folks can verify. It's still only an "ok" ONJ song, but it does contain one of my favorite misheard lyrics. I always thought that in the chorus she sang, "You get a mere heart attack" instead of "You're giving me a heart attack." I remember asking my dad what "mere" meant and even though it didn't make sense in the context, I went with it because it was all I could do. At least it's no "I got debated by your heartache" in that this one at least makes some kind of sense.

The video, as was the standard for almost all of ONJ's videos, was bizarre - a combination of 80s cliches and serious WTF moments. Plus, the mullet was SUCH a bad idea.

My favorite part of this song was always "Must have died and gone to heaven. What a way to gooooooooo." It always seemed a bit naughty. ;)

As for the video itself. Whut? It's a song about a hot guy and what he does to her. Why is there a kid and why is she in a block of ice? I'm so confused.

Dan, I have had this song stuck in my head all day, and I couldn't even play the song at work. I was REALLY big into ON-J around this time in her career.

I just interrupted a 32+ times repeat-fest of Bad Romance for this. Feels like a palate-cleansing lemon sorbet in comparison.