I know that I've mentioned on numerous occasions how much I can't stand mowing. It is so worthless because all the grass does is grow back. We're rapidly heading into the season where things just don't stop growing, which just serves to irritate me because the backyard can turn into the forest moon of Endor overnight. My brother, oddly enough, has the opposite problem - nothing grows in his backyard no matter how hard he tries. Granted, he does live in a desert, but who's keeping track of that.

So tonight was the inaugural mow, and while I can't say that I enjoyed it, it wasn't quite as bad as I thought it would be. The smartest thing I ever did was stop bagging the clippings. Now, I just let them shoot out all over the yard, and yeah, sometimes when I go a long time between mows, you could seriously use a baler, but who gives a shit, right? I'm not one of those mindless suburban dudes that obsesses constantly over how long the grass is. Anyone who has an issue with the length of the grass in my yard (which is never all that bad - I mean, it's not like the beginning of Little House on the Prairie or anything) can come and mow it themselves thankyouverymuch.

If I seem cranky, it's because mowing is the last goddamn thing I want to do after I've worked all day. I know that some people get a huge amount of satisfaction out of an immaculately kept lawn. Not feeling that here, folks. I get much more satisfaction out of cleaning the kitchen (which is an equally Sisyphean task, for as soon as you're done doing all the dishes, someone inevitably comes into the kitchen and sets a dirty dish by the sink.) 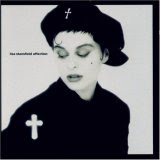 As a reward to myself for a job well done, I put on Lisa Stansfield who I haven't listened to in an age. I picked up her CD Affection from the library this week - I had purchased that on cassette back in 1990 when "All Around The World" was hugely popular and inescapable on radio. I forgot how good that album was!! I think it's likely to be in heavy rotation this week - I may even have to save up a little bit of money for her best-of set of which I have several songs already, but you know! I'm really grooving on it - and as a special treat, here's the video for one of my faves, "You Can't Deny It." I remember walking around Swan Lake listening to this song - too bad it didn't chart nearly as well as "All Around The World" did.

Affection was a great CD! I actually like the title track tres beaucoup..!

It's like you're in my head. Yesterday, "All Around The World" came on while I was waiting for my prescription to get filled at the CVS, and I thought: I need to do a post on the songs that you just never get tired of hearing. There are those songs...heard 'em thousands of times, but they are still irresistible...This is one of those songs! The album is the bomb, too. I also really like that song "What Did I Do To You?"...the flute is so alluring. ;-)