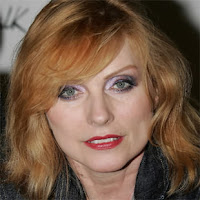 Deborah Harry is one of those artists that I wish could record forever - and certainly more often. I was thrilled with her duet with Moby that was released late last year, and was even more thrilled when I found out she was going to be on the True Colors Tour with Cyndi Lauper and Erasure (among others) this summer - a show I will actually be attending in Chicago come June 12th.

But perhaps the best news of all is that she's releasing a new solo CD in August called Necessary Evil. It comes a full 14 years after her last solo album - the underrated Debravation. While Debbie's solo stuff is very much an acquired taste, I think it is simply divine. The best $3.88 that I ever spent was on the Def, Dumb & Blonde CD in the cut out rack at Camelot. Combined with Erotica, it made for some great musical memories from the fall of 1992. Debravation took a little bit of time to get into, but ultimately, I think it's a great record as well and also one that never fails to remind me of my undergrad at U of Iowa.

The kickoff single is streaming at her myspace page - it is very catchy and will hopefully be performed on the True Colors Tour. The most amazing part of all this is she is SIXTY ONE years old! That's only one year older than my mom and dad. That seriously blows my mind.

It's funny, but I'll always imagine her on that rooftop back in the Autoamerican days, or singing "Heart of Glass" on that disco floor.

It's amazing that she's not resting on her laurels someplace, enjoying retirement!

It is exceptionally hard to reconcile how she looks now with the sex pot of the late 70s/early 80s, there's no doubt about that. And it's getting very disconcerting to me that all these music idols are getting on in years - for it can only mean that I'm aging as fast as they are.

But the single is great - it'll be a cold day in hell before it gets ANY play in the US, but so goes it for most songs of any quality these days.

I love her Lil Kim tribute song - the one with the Rapture-rapping.

Hey Dan - hope all is well in your world. You might be amused to see that poetry&pop-culture is now my blog tagline. Thanks for the inspiration.

After I read your Kylie mention I did some scouting around on the usual forums etc, and I hate to tell you but nothing that has been posted is going to be on Kylie's new album. All the songs have been available for well over a year. The truth is although there has been some recording, nothing has been mixed apart from Diamond, and nothing has been leaked. It is very unlikely we will hear anything leaked on the internet until nearer the end of the year when the album is scheduled. So what you're listening to is old Kylie b-sides and cuts that didn't make it onto albums, although I have to say a lot of them are very good quality. Anyway - enjoy them for what they are, but when the album does come out it will be completely new.

Great to see that you used poetry & pop culture as the tagline - glad to be of service! :)

Too bad this is not (necessarily) the direction of the new Kylie album - but time will tell I guess. I did read that she recently met up with another fave of mine, Blossom Dearie, as she was looking for some inspiration for the new album. YAY!

Great to know other Debbie fans! Debbie/Blondie was my introduction to music and she was my first love and idol.

I think Deaf Dumb & Blonde was one of the best alubms. Especially the track "Sweet & Low" Her song about Andy Warhol.