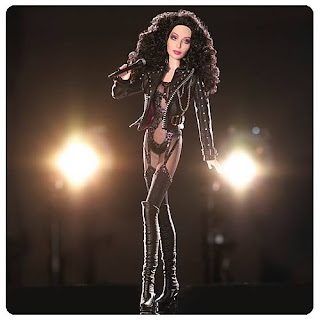 Anna's exact words were, upon viewing Barbie as Cher, "Ah - I want that! But she doesn't look like she can stand up well."

Are you kidding? If it didn't seem to confirm every assumption ever made about me by people who do not know me well, I would buy that and put it on my shelf in my office. However, I draw the line at putting Barbie dolls up there with the zombies, Aliens and Scully and Mulder (among others.) Still, it is Cher. Wearing the famous slingshot.

Now, had it been Barbie as Madonna wearing the famous cone bras and the fabulous I Dream Of Jeannie Blond Ambition hair, I wouldn't even think twice.

Wow your daughter looks like Cher in that pic.