I had great lunch and conversation today with a new-ish friend. We have been trying to get together for quite a while now, and one thing or another kept coming up and prevented it from happening. But it finally worked out and we talked politics and music and church and music and life stories and did I mention music? So anyway, that was fun. He didn't know the way to the place where we were going to have lunch, so I offered to drive. It was at this point that he said something that catalyzed this blog post - a post has been forming for quite some time. It just needed the blog-equivalent of the Gringard reagent to get it going.

He said something along the lines of "I didn't picture you as a pickup truck type of guy." (or something like that anyway.)

The truth is - I'm not. When I think pickups, I think big burly guys that are out hunting or dry-walling or something like that. Let me tell you how I am NOT that kind of guy in the slightest. But when my dad offered to sell my his pickup (because he was getting a Jeep and seriously, you don't need three cars in a house where there are only two licensed drivers) I jumped at the chance, although at first I wasn't sure how I would pay for it. No worries - my dad charged me 2 dollars for it. He had sold both my brother and my sister a car while they were in school for 1 dollar each. He told me that he had to double the price because I was not in school but, rather, was a working stiff. Fortunately, I was able to swing that.

I drove a pickup when I was in high school - a little green Ford Courier. I drove that because, honestly, it was a choice between that, my parents' conversion van or Ford Fairmont station wagon. My dad always says that he had me drive that truck so girls didn't date me for my car. He was successful - girls did not date me for my car. But I became pretty closely associated with that green pickup, people always knew it was me when they saw it. And it was pretty fun to drive - a little stick shift that was pretty forgiving. It had nothing but an AM/FM radio but that was back when the radio was good, so no worries there.

Driving a pickup now seems a bit like I am trying to be someone I am not - but really, that's not the case at all. As you might expect, I am taking the fact that I drive a pickup now and turning the popular conception of who should be driving a pickup on its ear. I remember one Saturday night not all that long ago I was going to go down to Cafe Diem and sit with a cup of coffee and just enjoy some "Dan time" and I found myself driving the truck down Main Street in Ames while playing Erasure. I felt a bit like John in Heidi's story (for those who have read it, you'll know what I'm talking about.) It seemed so incongruous. Here is this decidedly NON pick-up truck music coming out of a pick-up truck. It was at that point that I just laughed because really, what else would you expect from me? I just love listening to my cheesy pop music in a pick-up. It is yet another way to do the unexpected - something I probably don't do nearly enough of. Plus I love ditching male stereotypes just on principle sometimes.

So if you hear Confessions on a Dance Floor coming from a pick-up truck, you can probably bet it is me. This is my truck - complete with its HRC sticker on the back window. 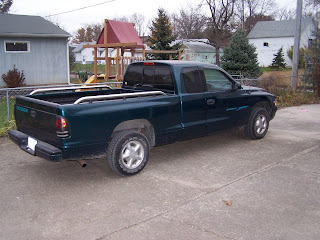 I do like it - it comes in SO handy. And surprisingly, I haven't had all that many requests to help people haul stuff. I love owning a pick-up for so many reasons, but not the least of which is because I drive it and don't fit the stereotype.
Posted by Dan at 11/10/2007 05:16:00 PM

If I tried to drive that I would constantly be bumping into shit. But I guess you don't have as many parallel parking moments in Ames!?