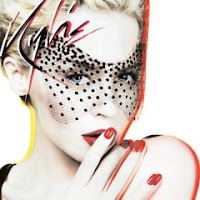 I vowed I was not going to listen to Kylie's new record X until it was released, but that was always a bit of a dicey arrangement as it technically doesn't get a US release until well into 2008, despite the fact that it's being released in the UK on November 26th. I just got done telling someone last week that I was going to wait until at least then before downloading the tracks and giving them a listen.

I am here to report that I have failed miserably which really puts my ability to stand up to the Madonna leaks (once they start leaking) into question.

So far, what do I think? Well, I've only listened to a few tracks so far, but it does appear to me that while it is good pop fun, X is a more streamlined attempt at what Body Language was designed to do - and that is to break Kylie in America. I don't think that's going to happen. As much as I love songs like "Wow" and "Like A Drug" I just don't see them getting even the remotest of airplay here in the U.S. But, as I've said before, the U.S. is not the world, and I hope Kylie gets some good success with this record. It is pretty solid, and I especially like how there is only one track that exceeds the 4 minute mark - and only by 2 seconds at that! It is almost a throwback to vinyl 45s in that respect!!