I drowned myself tonight in sangria 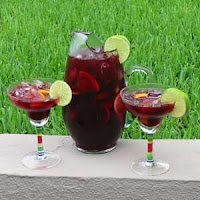 OK, I didn't really do that, but I am loving the song that lyric came from - it's from the Girlyman song "Viola." Their music reminds me of heading up to Prairie Moon Winery in the heat of July and drinking sangria underneath an umbrella while sitting on a blanket - and not just because of the mention of sangria. Their style of music is very much in the vein of the live music they generally have there.

In other goings-ons of interest:

I love the Chapin Sisters cover of Madonna's "Borderline." Taken from the forthcoming Madonna tribute CD, Through The Wilderness: A Tribute To Madonna, it is an understated version of what is perhaps my favorite of the really moldy oldies. As Yuri pointed out to me, it's like Wilson Phillips meets Alison Krauss. I may actually pick up this Madge tribute album - the others that I've heard (i.e. Virgin Voices) have pretty much been terrible.

Tomorrow may very well turn out to be my last shot at getting the gutters cleaned out. I may have no choice but to do it. I don't particularly want to spend my Sunday on the roof, considering I walk like I'm just learning to walk when I'm up there, but I think my hand is being forced. It really makes me want to invest in Gutter Topper, but that's two grand that I just don't have right now!

We put up our Christmas tree on Friday morning. I was a sport (even Heidi said so!) on Thursday night and hauled all the Christmas stuff up from the basement even though I had worked 11 hours that day. Pictures to follow, I'm certain.

I have listened to the new Goldfrapp and my initial reaction is, while there are a few good songs on there, I'm mostly underwhelmed. I think it might be because, really, the only Goldfrapp album that I really like Supernature, and this is decidedly NOT Supernature. I still can't believe the record leaked three months before it's scheduled to be released. It makes you wonder why they aren't releasing it sooner if it's already in the can.

I am getting very seriously excited for the Christmas episode of Doctor Who. Sure, it's a one-off designed to get us through till the new series starts in 2008, but still. It's David Tennant and Kylie Minogue! On the Titanic! What more could you ask for?

Speaking of Kylie, I've had a chance to listen to more of X. "Nu-di-ty" is so bad that I don't think Britney would even sink to that level. But the bonus tracks "Rippin' Up The Disco" and "Magnetic Electric" are both worthy of being on the album. But how "Nu-di-ty" made the album and the fan-fucking-tastic "Fall For You" is relegated to B-side status is beyond me.

We stopped at the Java House on our way back home tonight. I miss it so much. I don't know why - it's very much like our local coffee house, Cafe Diem - but for whatever reason, Cafe Diem is just not the same. I think it is largely because I have such strong associations with the Java House, and the fact that there is no coffee on earth as good as St. Louis Blues. Plus, now that it's the holiday season, Candy Cane coffee is back, even though Heidi thinks it tastes like cough syrup.

Maybe I will put up my little fake bedroom tree today. Every year we say we'll go ahead and get a fake tree, but by the time we go out for one, all the good ones are long gone. So a real one this year again, with its attendant pains and pleasures.

I really love the new Goldfrapp, but I also love Felt Mtn. There are maybe 3 songs I don't care for on it. They have a history of changing but the core sound is unique to them on each record. You may still be swayed... This record has some lyrics that tap into some things I have been feeling, esp A&E, but it would not make sense to talk about on the blog because there's not much of my personal life on there and none of my "love" [cough] life. But that song taps into my whle unrequited thing I had going this year, which now may be over. le sigh,

You are so right about Nu-di-ty. Dreadful dreadful tune. Magnetic Electric is the type of song Girls Aloud would kill for and the Spice Girls should have recorded. And ballad white diamond is utterly gorgeous.

As for the Borderline cover ~ you had me at Wilson Phillips!

Admittedly, it was my first listen to the new Goldfrapp AND it was in the car so it was not a real intense listen. I'm going to reserve my final judgment until I get a chance to listen it appropriately!

I have no idea what you're talking about re: music tapping into feelings (yeah right!!) ;)