I'm resisting the urge to cheat and back-time this post so that it actually shows up on March 17th. In a perfect world, it would have certainly been here on time.

In the original version of the universe, tonight I was supposed to leave work at 10:30PM and meet up with my work friend Ryan and go drink green beer somewhere for a while. Well, as it turns out, things got busy and neither of us left work till 11:30 tonight and by then, it was just too late for me.

It's too bad, because I was looking forward to it. I haven't had green beer since college. I still remember the first green beer I ever had. It was at Diamond Dave's at Old Capitol Mall in Iowa City (sadly, it is now defunct as are a lot of things from my college years.) It was 1993. I was 20. Yes, I was a late bloomer. But I remember sitting there with my friends Rick and Ellen on a night after a test sometime around St. Patrick's Day. I also won a Fire Water Cinnamon Schnapps T-shirt rather inexplicably.

I think I have probably had green beer since then. I remember one year shortly after I met Heidi when I went out with some friends to Fitzpatrick's in Iowa City (also defunct! Good God!) and I almost certainly had some then. But overall, since I am not a huge drinker and an even less huge bar frequenter I just have not had the opportunity to have green beer for a damn long time. So the fact that I didn't get to have any tonight was frustrating, to say the least.

But I was not to be deterred completely. I had some Corona in the fridge and with the help of some green food coloring, this is what I came up with. 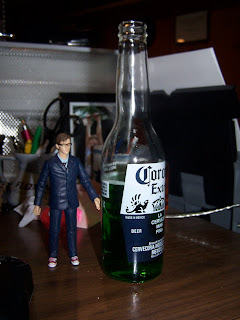