I slept in this morning since it's the weekend and starting Monday I have to work eight days in a row with no day off. This was partially my choice, partially requested of me, but in the end, 8 hours of overtime will pad the next paycheck very nicely. I just have to make sure to do a little something nice for myself with at least an hour's worth of work.

As I detailed in a previous post, our tax refund is on its way come Tuesday-ish. This will be most welcome as it will pay off last October's removal of the dying tree in our backyard, as well as a piddly little credit card that we aren't using any longer. Paying these items off will free up some money each month for other things. In addition to paying off these two items, the refund will also help pad savings a bit and is allowing us each a fun thing or two. Heidi went and got a new keyboard and mouse for her iMac last night. I was *this close* to buying a PS2 and Guitar Hero last night, but had an 11th hour change of heart, wondering if such a thing was really a good idea. I think I'm really getting used to the idea of upgrading my iPod to the 160GB iPod classic, but I'm still thinking about it.

We paid off the last bit that we owed on the furniture that we bought in January during the whole room remodel as well. Anna and I drove over to the furniture store and made the third and final payment in person. It also gave Anna an excuse to scout the store for the fake food that furniture stores place in strategic spots around the store, presumably to make you want to buy the furniture. Our favorites are the spilled drinks, as if Joan or someone had dropped her drink as she slipped off into an alcohol-induced slumber. (Naturally, I'm thinking that, not Anna.)

I also headed to Mayhem Comics today to pick up the last two installments of Marvel Zombies 2. (link contains spoilers!!) However, I must have missed the boat completely on the 4th installment, because all they had was the 5th and final installment. And not having the 4th, I certainly didn't want to buy the 5th. I like Mayhem enough, but I always feel a bit out of place there, like I'm not quite the right kind of geek to fit in at a comic store. I left empty-handed.

Once I got back home, my mom and dad arrived having been to the funeral of a friend of my grandmother's. I also found out today that my grandmother is on hospice care after having been rushed to Mason City for some kind of nebulous cardiac test that revealed her heart, after nearly 88 years, is not what it used to be. Anyway, my father arrived ready to go to work on my truck. I'll admit, after my day full of disappointments and half-starts, I was not really sure I was ready to deal with my damaged truck.

For those that don't know, about 6 weeks ago, my truck kissed a telephone pole going about 10 mph down a snow-covered city street. It crunched the passenger's side headlight and turn signal and bent the front fender all to hell. The last time my father was here, we tried to push the bent metal frame back into place with a jack, but it didn't work. This time, he was back with a tool that was sure to work. It's called a Porta-Power, and it looks a little something like this: 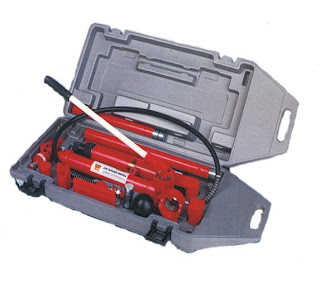 It is basically a hydraulic hand pump, which I think sounds more than just a little bit sexual. After a little bit of practice, we finally got it figured out and, I'll be damned, but the worst of the damage has been reversed! And I didn't even need to take it to the body shop. That's a good thing, for I do not carry collision insurance on that truck because it is worth so little. Now the next thing is to find a new headlight and turn signal, which we should be able to find at any good junkyard for little or nothing. Then we'll turn our energies toward figuring out why the engine dies every time it idles. My money's on a temperature sensor, but what the hell do I know about cars??

I was lamenting earlier today to a friend that I really didn't get anything done today. This post belies that, doesn't it? And now, I'm sitting here listening to Casey Stratton's latest release, Orbit, and am mostly happy with the way the day turned out. And Heidi and I might still try to watch Harry Potter & the Order of the Phoenix tonight.

Not too shabby, really.