Disclaimer: In the next few weeks there are likely to be a lot of Madonna posts. WTF were you expecting with a new record coming out? 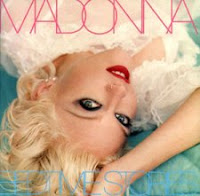 In what is surely a sign of the apocalypse, I have been listening to Bedtime Stories in its entirety this morning. That's right, all the way from "Survival" to "Take A Bow." It remains to this day my least favorite of Madonna's albums. It has not stood the test of time like other albums have. Certainly, it is no Erotica or Music or Ray of Light. It was perhaps the first time that Madonna was behind the curve, adopting the mid-90s R&B groove that everyone seemed to be doing at the time. It was probably what she needed to do after the damage done to her career with the Sex/Erotica/Body of Evidence projects, but the album itself has always struck me as uninspired and color-by-numbers.

I haven't listened to this album in an age apart from the singles which are on my iPod. It is even more uncommon for me to listen to "albums" these days as the advent of iTunes and party shuffle has just made listening to an album so 1990s. But every now and then, it's fun to do, to remind yourself that this was the artist's vision for their work.

What I've found while listening to this record is that, as XO pointed out to me several weeks ago, there really are several great songs on this album. "Secret", "Survival", and "Love Tried To Welcome Me" are as good as anything that she's ever done. And "Bedtime Story" the song is one of those songs that has slowly and stealthily snuck its way into my Top 10 Favorite Madonna Songs thanks to some great remixes and a bizarre (but completely overdone, IMHO) video. There are also some absolutely heinous songs on here as well, the worst offender being "Don't Stop" (not a cover of the Fleetwood Mac song although wouldn't that be a trip?) It features the single most inane lyrics of any Madonna song ever, and that includes "I Love New York", which despite it's "dorky" lyrics is oddly endearing. But "Don't Stop"? Try these on for size:

Certainly not any better or worse than most lyrics to dance songs? Well, this is the woman that gave us "Deeper & Deeper." I expect better. And to add insult to injury, "Don't Stop" was billed as the upbeat dance song on Bedtime Stories. Never mind that it never kicks out of its lazy ass mid-tempo groove. It has great remix potential (although it never was officially remixed), but as a song in it's original form, it is probably my least favorite Madonna song.

Ultimately why this album is so disappointing for me is that it is Madonna following trends rather than setting them. And that's why I'm nervous about Hard Candy. While "4 Minutes" is great and the clips I've heard of other songs are assuaging my apprehensions slightly, I will still reserve judgment on the album until I have heard it (well, duh!)

My goal is to not listen to leaks (especially shitty ones that are web rips or whatever) and listen to the album on the way to work on Tuesday, April 29th. I managed to avoid the leaks of Confessions, but it is going to require incredible will power and stamina to avoid the album leak this time around.

In the meantime, here's a great interview she did on Z100 in New York. I love her radio interviews! She seems so much more human in radio interviews than she does in television interviews. And here's the cover of Vanity Fair that's making the rounds on the blogs this morning. It's fantastic. 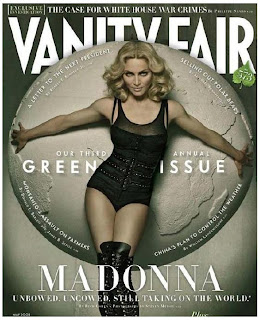 that's totally my concern - her following trends rather than leading. And while Bedtime Stories is my least favourite album, Take A Bow is one of my all time favourite madonna songs...

Ahhh.
I am hurt! Don't Stop is one of the only reasons I continue to own this Madonna album. The song is all about the sound, certainly not the lyrics. However, this is a crime Madonna has committed many times in all her records. Pretender? Jimmy Jimmy? Noboby's Perfect? (No, not even you, Madge!)

Her nasal/church lady/ghetto girl/ sound and look in the song and video for Secret is enough to make you pull your nose hairs out one by one. And Human Nature? OMG! My natural reaction was to throw up violently. Don't Stop was actually a break from the distress of that album.

But, I will point out one thing. Let's not fool ourselves, children. As true Madge fans, we know that we will promote, play, rally for, and praise any Madonna creation. NO MATTER WHAT. And we know it. I did it with Bedtime Stories and we will do it again with Hard Candy if need be. We need not reserve judgment, as we already know, without hearing it, that it WILL be fabulous. Even if we need to make it that way.

I am feeling optimistic about Hard Candy. 4 Minutes is awesome. Catchy and cool. And you know what, it is cutting edge. The sound is really like nothing else we have heard from her or anyone. Yes, it has hip-hop flavor, but that is it. I'm excited.