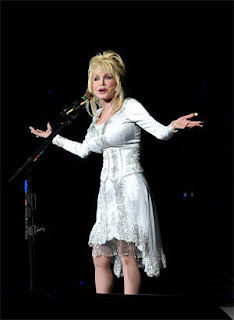 So last night was Dolly Parton, live and in concert. Originally scheduled for February and postponed to May 7th, Heidi and I trekked up to Minneapolis yesterday to see Dolly play Northrop Auditorium. Before I get to anything about the show, can I just say that I don't think there is a single road in the greater Minneapolis area that is NOT under construction. I-35w is a mess and since the bridge that crosses the Mississippi is still out of commission, you have to get kind of creative with how you get around. We got pretty lost on the way to the concert, but eventually, taking back roads and stopping once for directions, we found it.

What can I say about Dolly that hasn't already been said? She's a true American original that is aware of her image and mocks it endlessly. What I will say is that she is probably the most gracious performer I have ever had the privilege of seeing live. She knows the reason for her 40+ year career and why she still can command $75-150 seats at her shows. She thanked the fans so frequently at the show that it bordered on "enough already!" but she was so genuine about it, you could hardly hold it against her.

She started right on time (which is something another diva could learn to do *cough*Madonna*cough*) and people were on their feet right away with a rousing version of "Two Doors Down." From there, she blew through a veritable hit parade, speckled with various covers (a great reworking of John Denver's "Thank God I'm A Country Boy") and new songs from her most recent record Backwoods Barbie. Truthfully, the new album is a bit hit and miss for me, but she did play quite a few of the album's strongest tracks, including what I consider to be a new Dolly Parton classic in the title track. She's written some pretty cheesy stuff over her career, but every now and again, she hits one out of the park and "Backwoods Barbie" (the song) is the natural descendant of classics like "Coat of Many Colors" and "I Will Always Love You."

EW recently did a bit on Dolly's stage presence, and let me tell you, no performer I have ever seen live was as funny and engaging as Dolly was. She trotted out a lot of the same lines she's been doing forever, probably the most famous being "it takes a lot of money to make someone look this cheap." Dolly's between song banter redefines the term "cornpone" but it just endeared her to the audience even more. She had us eating out of her hand, and I'm sure that she would have it no other way.

Highlights for me included "Here You Come Again" which she hoped we all remembered (like I could forget. It's #3 on my most played playlist on iTunes), a dulcimer accompanied version of "Shattered Image" (while images from the tabloids played on the screen behind her) and, "Eagle When She Flies," which she said she wrote for the movie Steel Magnolias, but was unused. I was surprised to hear that last night as it's a relatively unknown album track. I mentioned to Heidi on the way home that I wonder how one goes about picking the set list when you have such a huge catalog of songs to choose from. I was also pleased to see that "Baby I'm Burning", one of my favorite "disco Dolly" songs made the set. Dolly referred to it as her "acid reflux" song and how you know you're old when you stop taking acid and start taking antacid.

See? Cornpone. But the crowd ate it up.

It was a great experience and the realization of a lifelong dream to see Dolly live. I think I've been waiting my whole life for that experience, ever since I saw the Dolly Live in London concert on HBO a zillion times as a kid. The thing that amazed me most was the diversity of the crowd. Yes, the gay guy contingent was (naturally) on the high side, but there were also little old ladies and their husbands, couples like us, and groups of 20-something women. Only Cher had a more diverse group of people. It made Heidi declare that she wants to be the old lady going to Cher, only it won't be Cher she'll be going to, obviously.

As grand as Dolly was, I would be lying if I said that every experience was perfect. During the intermission, we found out that seated directly behind us were the family of homophobes. The only comment I really heard was a young man commenting on the "large amounts of alternative lifestyles on parade." I must have blocked out the rest but Heidi said that this man's father also let out a slew of anti-gay venom. The Amazon glared at them and suddenly, the wife was urging her husband to shut up. It riled Heidi and me up, but I took solace in the fact that Dolly would have probably kicked them out of the show for talk like that.

One final note on the show: I was going to bring my camera to see if I could sneak a couple photos even though I had read that the "no photography" rule was being militantly enforced. Heidi was a total killjoy and talked me into leaving the camera at home. Boy, am I glad she did. Security was hopping all over the auditorium during the show, confiscating the cameras and cell phones of those daring enough to try to snap pictures. Honestly, I don't know what the big fuss was, but I am sure glad that I didn't lose my camera or my phone last night.

The show got out at 10:30ish and then it was a 3+ hour drive back to Ames. We pulled in at 2AM and collapsed into bed. I should be sleeping now, but I'm off work today so no worries.

Dolly, may you live long and prosper. But when that time comes, may you get your wish to drop dead in the middle of a concert, doing something that you truly love to do with a smile on your face.

Great review, Dan! Sounds like you and the Missus had a great time!

Did you make the pic real quickie with your phone? I'd say you had good seats judging by the distance if you did. :)

Nicely put about picking a setlist. How does a legend like Dolly pick the 10-15 songs to perform? Obvs the album needs to be promoted, but other than that, where do they come from? I'm sure she did 9 to 5 and Jolene, right?

Woot! I'd love to see her in concert - she's terrific. Glad you had such a good time ;-)

Sadly, no. That picture is one I found on the web (and I probably should add a tagline for photo credit.) Our seats were about 20 rows back no the left hand side, but truly, there were no bad seats in the house.

Oh, yes, "Jolene" was the third song and "9 to 5" was the last song before "I Will Always Love You" The crowd just LOVED "9 to 5" I was just laughing at how she was always like "I can't believe you guys remember 'Jolene'" As if!

I love the antacid/acid joke. So cute!

I really, really hope the rumours of her eventually bringing this show down under are true -- I know that, before the cancellations, a tour promoter here had pretty much said it was definitely going to happen.

Fingers crossed; my BFF Ben & I would simply lose it to see her live.