It is amazing to me that July is nearly over. Well, it's over half over and before you know it, it will be August. We went over to Carroll today so that Anna could go to the circus with my mom and dad and Heidi and I could go see The Dark Knight. The movie is highly recommended - seriously, the buzz around the movie is right on the money. I'm not sure I'm willing to call it a better superhero movie than Spiderman 2 (which I thoroughly enjoyed), but it was very good. Heath Ledger is almost assured to get an Oscar nomination and the rest of the cast turned in good performances as well. But seriously, it was Ledger's movie.

After the movie, we had a lazy afternoon at my folks' house which mostly consisted of me being a layabout and also taking a serious nap. There is something about their house that just inspires me to sleep. I don't know what it is for sure, but I nap there almost without fail every single time we go to visit. I think it has something to do with it being the house I grew up in. I feel pretty lucky to still be able to visit the house I grew up in, the one in which I spent my non-wayward youth, for a lot of people don't have that option. My mom and dad are in the process of renovating the house room by room and they are doing a great job. Although I was upstairs while I was there and stopped by the upstairs bathroom and I swear that hasn't changed a lick since I was a wee child. It has the same carpet, the same wallpaper, the same non-functional sink, the same black towel shelf with rust stains from where I would set glasses of water or whatever. It was oddly comforting. I know they're going to gut that room next, and it makes me a bit sad, but honestly, it needs to be updated! I would give my eye teeth for their claw foot bathtub, but seriously where would we put it?

As we were getting ready to leave, my dad noticed that the passenger's side front tire was pretty much flat. We pumped it back up again, but then we found the culprit. A screw had lodged itself in the tire which made it pretty much impossible to drive on that tire all the way back to Ames. (As Heidi so appropriately put it, "we've been screwed!") Anyway, we contemplated putting on the donut and just driving slowly back, but then Mom and Dad told us just to take their car and they would take care of the tire sometime this week. I am goddamn lucky to have such good folks that, even at the age of 36, still want to take care of me and my family. So we drove their car back and got home around 9:30PM.

On the drive back, I was thinking about how Sunday nights were when I was in high school. Mostly, they didn't mean anything. The only difference between the week and the weekend in those days was that "The Young & The Restless" wasn't on on the weekend. That changed quite a bit in college as every summer I had a job that was Monday through Friday and it was a reasonable approximation of the working world (although I could still wear jeans to work which decidedly does not fly at my current job) so there was a difference. But even then, that money was just gravy and not the stuff that keeps food on our table and the lights on and the roof over our heads. Those were simpler times, but I would not go back to them given the chance.

In addition to The Dark Knight, I saw The Incredible Hulk with Matt on Friday night which was leaps and bounds better than the Ang Lee version. We went out for coffee afterward to deconstruct the movie and then I hit Hy-Vee to pick up some Damp Rid to battle the latest deluge to threaten the basement. I was on the way back from the West Ames Hy-Vee (which, from this point forward, will be referred to as "the ghetto Hy-Vee") and was listening to 100.3 The Bus since I had forgotten my iPod at home. A song I had not heard in an absolute age came on the radio - one that had nearly fallen off my radar altogether. It was the 1985 Clarence Clemons/Jackson Browne duet "You're A Friend Of Mine." The Bus will truly play any song, I swear. But what a good song to hear. I must have grabbed it in the Napster days because you certainly can't purchase it digitally anywhere.

So a good weekend. We're three episodes from the end of Season One of "Ugly Betty" and I've picked "The X-Files" back up again. Scully is as hot as ever, and even more so in this shot: 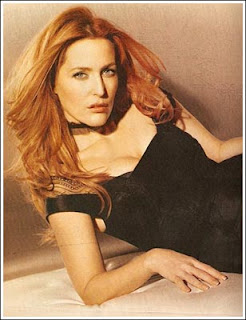 All she has to do is say "I couldn't find anything in my post-mortem exam to suggest anything supernatural" and she'll have me. Scully, I love it when you're all rational. It makes me weak in the knees.

We are going to see The Dark Knight this weekend, so I'm excited about that. Plus, The X-Files: I Want to Believe premieres this week too, so hooray for that. That is a must see as well. Love the Scully pic. Remember the line when she first meets the Lone Gunmen? "She's hot!" was all they could say!