In the evidence of non-brilliance

Madonna herself said it best in "Mother & Father": I've got to give it up. As much as it pains me, I'm giving up my continued defense of Madonna's Hard Candy. Perhaps I could if Madonna bothered to actually PROMOTE the album apart from a couple of one-off shows and some sub par videos, but no. I know she's touring in support of it, but she would have done that anyway. Plus, by the time she actually hits the road, the album will probably be off the charts and will have run its course.

I'm afraid I'm going to have to agree with XO and say that Hard Candy really is STALE Candy. It has not aged well in the two months since its release. As an album, it just doesn't hold up to repeated listens. There are several excellent songs on it, and a couple latter day Madonna classics, but mostly, I just don't find myself going back to it again and again like I should be a new Madonna album. Hell, at this point in 2003, I was still listening to American Life like crazy, and we all know how well received that album was. Last night when I went to take Rampage back to Family Video, I put Hard Candy in the car's CD player and didn't even make it through "Candy Shop" before I was putting Confessions On A Dance Floor in to cleanse my palate.

Someone on the Madonna listserv that I was on ages ago once said something that has really stuck with me - and that is you can ALWAYS tell when Madonna does something half-assed. In a year that has seen her adopting a child, directing a movie, making a documentary and launching a clothing line, making an album seemed to be far down the priority list. The very thing that has made her famous since the early 80s took a backseat. She neglected the music.

I have been a Madonna fan for nearly 25 years and I approached this album with a great deal of trepidation. I was nervous about it from the get go. As soon as I heard she was collaborating with the hot producers of the day rather than finding producers and turning them into the hot producers (a la Stuart Price, Mirwais, etc.), I knew we were in trouble. It struck me as very un-Madonna. Rather than setting trends, she appeared to be following them. When "The Beat Goes On" and "Candy Shop" leaked last summer, it seemed my worst fears were confirmed. For the first time in her quarter century career, she seemed to be going somewhere that I could not follow, at least not very easily.

Still, I was willing to give her the benefit of the doubt. Initially, I did like quite a few of the songs. I'm recognizing that now as a similar feeling to being caught up in the initial giddiness of a crush, with what happens to the relationship being more accurately determined after the giddy phase has passed. Well, we're here folks. And honestly, there are four songs that do it for me and that's about it. The new Madonna classics on this album are "Miles Away" and "Devil Wouldn't Recognize You." These two tracks have been played over and over again and when I remove them from the context of the album, I really do enjoy them. "Give It 2 Me", the next single which looks poised to flop here in the US, is also quite good, but I vastly prefer the Oakenfold remix edit that was on the iTunes deluxe edition of the album. This mix strips the song of of its R&B aspirations and makes it what it should be - a dance floor stomper that takes no prisoners and doesn't look back. Additionally, "Dance 2Night" still sounds good, even though, as Adem pointed out in the comment section to my original Hard Candy post, she does sound a bit bored singing it.

This will probably amaze and piss off and cause *gasps!* from my pop blogger friends, but my harshest words are actually saved for "4 Minutes." In the final analysis of "4 Minutes," I view it as no more than a novelty song, not all that dissimilar from a "Walk Like An Egyptian" or "Woolly Bully." It may have been a huge hit for Madonna, but it broke no new ground, found her sitting in the passenger's seat on the kick off single from a new album and those goddamn horny horns just grate on me. I know that it was her most successful single since "Music" in 2000, but at what cost? And how much of that radio play resulted from the Justin factor? 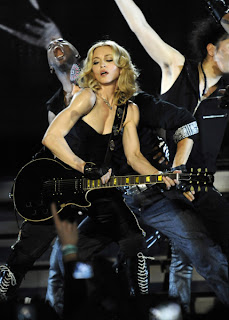 promote, I harbor not a single regret over having purchased tickets to the Sticky & Sweet Tour. I have no doubt that the tour will be fantastic. Madonna has never done a tour half-assed, ever. I think that while the set list will be Hard Candy heavy, there will also be a liberal sprinkling of 80s hits and fan favorites. She is smart to do this. Even though she would like to distance herself from the hits that made her who she is, those are what people want to hear. Rumours that she will be double-dutch jump roping in heels as well as including my all time favorite Madonna song, "Borderline", leave me with high hopes that the tour will be as good as all the other tours I have attended. I have yet to be truly disappointed by any of Madonna's live shows and perhaps hearing some of these songs performed live will put them in a new perspective and allow for a new approach.

This is not the first time that Madge and I have fallen out. I have reported in this blog over and over again about how I severely cooled on Madonna in the wake of "This Used To Be My Playground", still a song I feel to be a low point for her. It even caused me to put off the purchase of Erotica. However, the eventual purchase of Erotica launched my fandom in a new direction and pretty much sealed my fate as in for the long haul.

No worries - I have not been replaced by a pod person and I'm not about to abandon Hard Mandy (as the UK tabloids are calling her.) I am not, however, someone who will defend everything that my favorite artists do when I do not like it. And this is the case with Hard Candy.

So if you're looking for me, I'll probably be listening to American Life. I am grooving on "Mother & Father" these days!!

Hmmmmmm - not sure I completely agree with you, but you wrote some very apt things in your blog. The album is great when I go for my daily jog, but that's about it. It is not an album I put on my iPod to listen to when walking to work or at home, and I think in my ranking of favourite M albums it will be far down the list. I think music making is something that has lost its sparkle for Madonna, so find it quite strange that she wouldn't just go on tour and perform a hits heavy set rather than one of new material - but hey, she hates to look back. This is also one of the main reasons why I just can't go and see her live (despite morally objecting to the price of tickets - I can have a holiday in Europe for the price she commands). I would rather have seen her recreate Blonde Ambition or The Girlie Show that see something she would produce nowadays.

Shame about the album really, but I think we have to remember that she has one of the strongest back catalogues of any artist I know, having been so consistently great, so when I am in the Madonna mood I have so much to choose from. She should just release a remixes compilation (so much good stuff to choose from), a comprehensive singles collection, a comprehensive video DVD collection, an album of unreleased material (b-sides/demos) and a box set of all her tours - that way she wouldn't have to release another album for a good three or four years, by which time she might have rejuvenated somewhat. But a boy can wish....

The problem with Hard Candy was symbolised by the Heartbeat demo leak. I know a lot of fans heard that and cringed b/c it proved her lack of involvement - the parts of the record recorded over the phone sound shallow. Many of these songs could have been recorded by anyone. None of us would have ever bothered with Heartbeat had it been done by Nicole Sherzingerdinger! It turns out it's not enough to have Madonna's voice on a track. It needs her spirit. Other tracks are just silly, like Incredible, which has a few good moments but more cringeworthy ones. It seems like a desperate attempt to beat the Rihannas, which will never happen. She is chasing the wrong audience.

The whole Hard Candy project also seems like a rehash visually- she's already done that look and clearly could care less about her calling card: a brilliant video.

The album also lacks emotion. She no longer writes about her life, which is ashame. That's one reason American Life ages well- it was introspective.

The tour should be great. If the setlist is true, I am aghast that she's hauling out Ray Of Light and Music again, but I suspect it will be a solid show. Unless she breaks her legs jump roping in heels...

It saddens me you dislike "This Used To Be My Playground" - that still turns me into a blubbering mess.

But I just plain don't like the song "Rain" and think "Open Your Heart" is kind of shithouse, whereas everyone else seems to love both of those songs.

As for Hard Mandy, I'm still listening to this very often during the week, and it hasn't soured for me yet. I understand where everyone is coming from though, and would very much like for her to ditch being a new hip hop artist by the time the next album comes along. Hopefully by then she'll go back to Price or, better yet, unearth some new hidden talent to collaborate with. But my passion for Hard Candy is still quite strong, though I have my moments when it comes to 4 Minutes. Some days I love it, others I skip it and have a yawn.