No, this will NOT be a post about the Backstreet Boys song of the same name.

Heidi has been stuck in revision hell for the last week, coming out of her office mostly just to refill her coffee cup (except when she takes the thermos up and then we don't see her for hours!), leaving Anna and me to mostly fend for ourselves. This is nothing new. I've experienced this countless times before, usually in October/November when she was getting a maunscript ready for the Golden Heart. We know that it happens, and we also know that it reaches an end. But since she has been in her own world (literally), Anna and I decided to go see what kind of trouble we could get up to.

That involved us going out to Family Video and renting a Wii game that I have been intrigued with in theory, but wanted to try before I plunked down the money for it. It's Rampage: Total Destruction (warning: sound pretty much instantaneously.) It is basically an update of the 1986 arcade game Rampage, which has you controlling monsters of various forms, knocking down buildings, eating people, etc. My sister and I played a PC port of this constantly probably 15 years ago so I have a lot of fond memories of the original game. Anna and I also played an emulation of the original game for a while a couple years ago. Whenever the monster ate a person, she laughed uproariously. So when I saw that it was available for the Wii with souped up graphics and up to 30 (!) unlockable monsters, we had to give it a go.

We did find it, picked it up for $3.50 (for 5 nights, no less) and then hit Dairy Queen on the way home. We shared one of their cotton candy Blizzards (which, amazingly, had no calories or fat) and then headed home to play.

It's pretty cool to be able to play this game in three dimensions, and the ability to play through real live cities has been fun. But it still suffers from the problem that the original game had: it is repetitive as hell! Destroy all the buildings, move on to the next block. That is not to say that it is not fun, I just don't see it having a super long shelf life. Anna and I have a blast playing it, though. It's especially entertaining to hear her say "Dad, I'm gonna go find some more people to eat!" And as I mentioned before, you're not limited to the original George the Gorilla, Lizzie the Lizard and Ralph the Wolf. There's a giant chicken, a giant ram, a cyclops, a shark, etc. They all do pretty much the same thing so the differences are more or less cosmetic.

Like I said, Anna and I have fun playing it, but it's certainly not worth full price. I found it on Amazon Sellers for 13 bucks and that is still just a little more than I am willing to pay for it. If I could get it for 10 bucks including shipping, then they might have a deal. Instead, we'll just play the hell out of it until Thursday when it's due back.

And in keeping with the giant, mutated animals 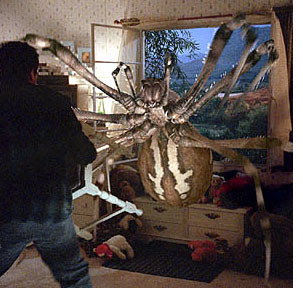 theme, I finally sat down and watched my Netflix that had been sitting on top of the TV for at least a week. Eight Legged Freaks is a giant spider movie from several years back that has been hanging out in the top 10 of my Netflix queue for ages, but always getting bumped back by other, sexier movies. I was so pleasantly surprised by this. It is a B-movie, there's no doubt about it, but what a heck of B-movie it was.

Basic premise is toxic waste spills into a local stream in Prosperity, AZ and it mutates the spiders (just the spiders?) to gigantic arachnids. I was expecting some pretty bad effects, but surprisingly, they were excellent. There were a few times when the CG-ness of the spiders was apparent, but mostly, I was just so overwhelmed by the sheer number of the spiders that I didn't pay attention to that much.

At only 99 minutes, it was certainly not a huge time sink, and it was very enjoyable to boot. Here's one of the better sequences.

i'm very disappointed that this wasn't about the 4th greatest backstreet boys song ever...