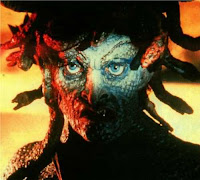 I slept poorly all last night because I was dreaming crazy dreams involving Medusa (specifically the Ray Harryhausen Medusa from Clash of the Titans) in my backyard shooting arrows at people and me narrowly escaping her clutches. I also remember that her head was in the mailbox as well, which was kind of strange because she was also alive and in the backyard. I remember waking up from the dream and actually being a little bit scared, even though looking back at it now, it was a seriously ridiculous dream. In my semi-conscious state, the sounds of the cats in the hallway made me nervous. I mean, how stupid is that? I finally fell back to sleep and slept until almost 9:00.

I got to thinking that surely dreaming of Medusa must mean something, but a Google search proved rather fruitless. I was talking to Heidi about it and she said that you probably have to figure out what Medusa meant in the dream. I really have no idea, to be quite honest. There are a lot of ideas, one of which being that Medusa "represents the fear of death in the form of the face of a putrefying corpse." (via) There are also a lot of sexual interpretations of the Medusa myth, naturally. Some point to Medusa being the the ultimate male fear of being overtaken by female sexual power, hence her beheading and neutralization.

I was always fascinated by the Medusa myth. I remember my dad telling me that story as a kid while I was lying in bed at night. I was particularly impressed with how you would not turn to stone if you looked at her reflection. This tidbit was used to great effect in Clash of the Titans, a movie that is so gloriously cheesy it still works today. Harryhausen's depiction of Medusa will always be the definitive one for me, even though the effects are so sub par compared to what could be accomplished now. But there's a part of me that admires the Medusa effects in that movie, especially in a day and age where CGI would make that whole sequence far too easy.

I really wish I had picked up the Medusa figure at that comic shop in Chicago a few years back. Although I probably wouldn't be able to look at it right now. 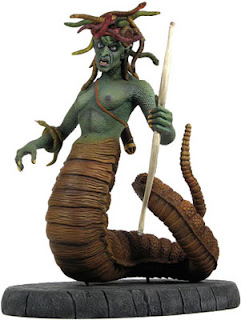 I think I was around 14 when my brother took me to see this movie on the large screen. Loved it then, especially the Medusa part. I was so fascinated by the animation of all the monsters, particularly Kraken.

Did you look up snakes? I'm not on any level an expert on dreams, but perhaps it's your fear of confrontation? That when you are faced with confrontation, you feel you are petrified and feel that you are turning to stone not being able to defend yourself? I dunno. I hope you get some answers in that.

You know, V, I hadn't thought of the snakes connection - I wonder why I hadn't. But that's as good an interpretation as any that I've been able to come up with. It wasn't like I had just recently watched Clash of the Titans or anything, so I'm not sure why that specific image of Medusa came up.

Fear of confrontation? Who, me? Yeah, there is some of that there. I mostly just want people to get along which I realize is a pipe dream for the most part.

Hi,
The other night I too had a dream about Medusa. I have never watched anything on TV about her or have even read about her. Her head had the snakes and I remember thinking in my dream that this is Medusa. I woke up and fell back to sleep and seen her again. I also tried to find out what this means. I have been a Christian for almost 30 years now so this isn't making sense to me. Any comments?