A picture worth a thousand lies

Popular (and not so popular music) is such a huge part of my life that it's kind of hard to surprise me with something new. But let me tell you a secret: the way to do it is to introduce me to something that is old but new to me. Something from a time period through which I watched music come and go, but somehow managed to slip beneath my radar. Well, this managed to happen last night.

A song called "Bury My Lovely" by October Project landed in my inbox quite randomly last night during an e-mail conversation with a friend. I had never heard the song before, but his music recommendations rarely, if ever, disappoint. First released in 1993, this song hits me in all the right places. It boasts a female singer (Mary Fahl) with a haunting vocal, a minor-ish key signature, and syncopation all over the place. It is angsty but not too much, and has a dark and brooding video to accompany it. (sorry it's so small! There were no clips on YouTube that I could embed.)

Where was this song in 1993? Obviously, it was nowhere near my radar. It would have fit in perfectly with where I was and how I felt about life back then. That is not to say that I was this emo, brooding young adult, but I did have my fair share of (mostly manufactured) drama and I can just see myself sitting in my room at 3AM on a Saturday night while playing around on the then-fledgling internet (ISCABBS anyone?) playing this song over and over again. Kind of like now, I just can't stop playing it.

So this morning, I picked up the entire October Project album on iTunes. You would think that it would get same-y and you'd want to turn it off after a few songs. I was nervous about that as well, but I'm glad to report that those fears were unfounded. It also has a completely memorable album cover. It makes me almost wish I had bought the physical CD. 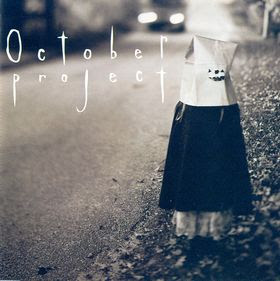 That's going to be my Halloween costume this year! OK, maybe not.

If I were to pick one adjective to describe October Project, I would pick autumnal. As I was listening to it this morning while walking to work, I found myself wishing that it were about 40 degrees cooler, a little bit darker and that the leaves were brown and on the ground instead of green and on the trees. I can see how this could easily have been one of the essential "fall albums" had I discovered it just a little bit later. But sadly, we can't control those kinds of things. I was lamenting this in an e-mail to the person who sent me "Bury My Lovely" and he had a great reply to this. I hope he doesn't mind that I reproduce it here.

October Project now is like looking at a picture of New England autumn during the blaze of summer heat.