So over the weekend, I finally watched Snakes on a Plane. I am VERY late to the Snakes on a Plane party as I no longer go to movies in the theater unless they are animated and rated G. Also, having talking animals helps, and since the snakes in this movie couldn't talk this was not a movie that I was able to see in its theatrical run (although, come to think of it, large portions of it featured animated characters, but whatever.)

Honestly, I did not go into this movie with the low expectations that I usually go into with these types of movies (see: Freddy vs. Jason and Alien vs. Predator.) I admit that my expectations were lessened some based on that generally negative reviews it got, but please people, it's a movie called Snakes on a Plane. What are you expecting? A deep character study? While some projects do end up surpassing what could be considered an unfortunate title (Exhibit A: Buffy the Vampire Slayer), I got exactly what I expected out of this movie. A plane filled with an ungodly number of snakes. 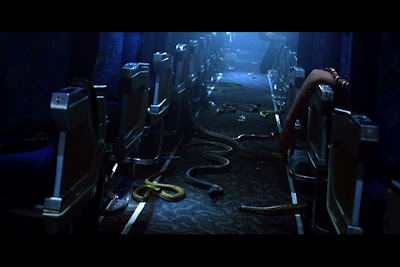 I do give the filmmakers credit for having a good story underneath the general reptilian carnage, but honestly, it was the snakes on the plane that we were waiting for, and boy, did it deliver! Short version of the set up: Young surfer dude witnesses a mob hit, Samuel L. Jackson saves his butt, asks young surfer dude to be a witness for the prosecution. Next thing you know, they're on a 747 from Honolulu to L.A. and said mobster decides the best way to kill off the witness is to fill the plane with hundreds of different types of venomous snakes. And snakes don't attack unless provoked you say? Not if you've sprayed the leis with snake pheremones to make them "go crazy."

I've been watching movies like this for most of my life, and I consider myself pretty jaded when it comes to this. I mean, ok, I had to turn the lights on in the house when I watched The Grudge and The Exorcist still scares me, but I didn't expect the genuine scares that were present in Snakes on a Plane. Most of the scares were of the "gotcha!" variety, but still, they got me. I jumped in my chair on several occasions. There was one particularly good death scene featuring some kind of poisonous boa constrictor, but I wouldn't dream of spoiling it (and just as soon as you forgot about it, it makes a cameo appearance in the final act.) So, yeah, scary as well as entertaining.

A word about this movie though - if you have even the slightest case of ophidiophobia, please do yourself a favor and do not watch this movie. I don't feel strongly either way about snakes, but watching this movie had me squirming around and just sure that there were snakes on the floor.
Posted by Dan at 3/19/2007 06:17:00 PM

Just LOOKING at the photo makes me queasy.

SNAKES. Why did it have to be snakes??

Dan...BC here.. you know i always tell people on this high hill of my old age that most terrifing crisis in our lives the best way to look at it is like a chinese finger trap...it may be counterintuative but first of all RELAX cause the more you pull the less you can do.... if i were caught in this situation like snakes ona plane or say a zombie invasion..i would control the freak out that would undoutedly want to overtake me and just start kicking some ass...if you take that appoach it wont go on forever...word to the wise..