The return of the mug 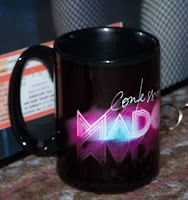 As some of you may recall, last summer my Confessions Tour mug took a rather unfortunate run through the dishwasher. Now, I had put it in the dishwasher before and nothing had happened to it, but this particular time, there was a nick in the Confessions Tour decal that allowed water to get completely under it. Consequently, it was all wrinkled and pretty much wrecked. It was peeling off and just looked awful. So we gave it a proper burial (i.e. pushed it to the back of the cupboard) and I tried to pick up the pieces and move on.

Well, with our nice tax refund, I decided to replace it from Fanfire - and it just arrived last week. YAY!! So once again, a small piece of the universe has returned to normal. No, it's not the mug that made the trip from Las Vegas with me, but at least I have one again!!
Posted by Dan at 3/04/2007 03:00:00 PM

Yay! The universe has righted itself (again..lol) !