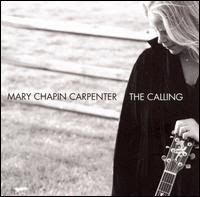 I had absolutely no idea that there was a new Mary Chapin Carpenter album coming out tomorrow! That makes me very excited! It's called The Calling and I found out about because All Music Guide sends me an email every week of the new releases coming out. Mostly, I just scan and delete as most of the stuff I really care about I already know about, but somehow, this just totally slipped past my radar.

I listened to 30 seconds of a track on iTunes called "On With The Song" (which was, according to All Music Guide, written for the Dixie Chicks) and if I weren't going to download the whole album tomorrow morning first thing, I would buy that song tonight.

AMG has given it a stellar review, and I'm very excited about it, as you can tell. Her last album Between Here And Gone was quite simply, the best work she'd done since Stones in The Road 10 years prior. It wasn't really a barn burner, but it was a solid record with thoughtful lyrics and melodies that could melt you. This one, however, promises to rock. And based on "On With The Song" I can't wait to hear more.
Posted by Dan at 3/05/2007 09:18:00 PM

The only MCC song I've ever heard is "I Feel Lucky"...which is a great song! I'm going to check her out her new stuff! Thanks for the recommendation. :)