I have a bit of a history with 10,000 Maniacs. It all started in 1988 – it was a year that I started to look beyond the radio for my source of music and discovered a lot of other bands and artists that didn’t necessarily get radio airplay but were producing some good music. My friend Kelly was a huge influence in that realm. She never really went for all the pop music that I was listening to – and she did a good job of tolerating all of my insane babbling about Madonna and Stevie Nicks. I don’t talk to her near enough these days, but as is usually the case, life has gotten in the way and we’ve kind of lost contact. I have her gmail address, and there’s nothing stopping me from e-mailing her, so who knows what my excuse is. Probably pure and unadulterated laziness. 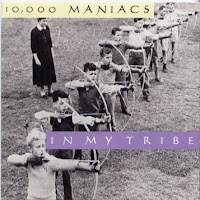 It was in the fall of 1988 that I purchased the Maniacs breakthrough Elektra release In My Tribe. I’m not even sure what first exposed me to this album – although I think it might have been the video for “What’s The Matter Here” which was getting some airplay on MTV at the time. It was my junior year of high school and I just absorbed it completely and utterly. I also knew the song “Like The Weather”, of course, it was the closest thing that the Maniacs had to a radio hit at the time. For whatever reason, the album just seemed to resonate with me.

“Like The Weather” remains one of my favorites to this day. It is, quite simply put, the bounciest pop song ever written about depression and seasonal affective disorder. I didn’t realize the subject material at the time, but perhaps subconsciously I did. I think I must have been dealing with depression even then, and a song like that would really hit me. It has another great bridge –

Do I need someone here to scold me
Or do I need someone who grab and pull me out of
Four poster, dull torpor, pulling downward?
For it’s such a long time since my better days
I say my prayers nightly, “this will pass away.”

There is simply not a bad song on this record – “Gun Shy” – a song about a young man going off to the army which reminded me of my friend Rick who was joining the National Guard, “Hey Jack Kerouac” was full of references to the Beat Generation, “A Campfire Song” features a brilliant countervocal by Michael Stipe (my first exposure to him at the time) and “My Sister Rose” details a wedding day in a joyous way.

Blind Man’s Zoo was the Maniacs follow up to In My Tribe in 1989. In 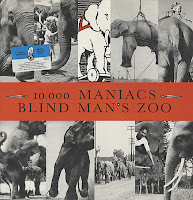 many ways, it’s In My Tribe, Part 2. Only thing is, it’s nowhere near as good. While the social issues covered on In My Tribe were handled with a bit of subtlety, no such precautions were taken on Blind Man’s Zoo. Listening to it is like being beaten over the head with a litany of social issues set to music that is subpar to that featured on In My Tribe. This is not to say that there aren’t highlights from this album for me – “Eat For Two”, with its minor key and driving piano tells the tale of a teenager, pregnant and alone. And “You Happy Puppet” is perhaps some of the best “jangle pop” I’ve ever heard. However, I don’t care much for “Trouble Me” which got extensive airplay at the time – I don’t know, it just never really grabbed me. I know that my father really liked it though.

After the relative disappointment of Blind Man’s Zoo, my perception of In My Tribe was sullied – so much so that I sold the CD of it that I had bought. Never fear, I eventually repurchased it 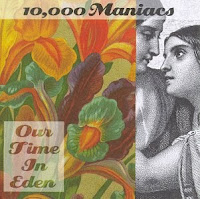 (and got “Peace Train” off of Napster since it had been deleted from later pressings of the album.) However, it was with much trepidation that I purchased Our Time In Eden. I bought it primarily on the strength of “These Are Days” which was impossible to escape in the fall of 1992. And yes, that song was and still is fabulous, although it has been a bit overused and is a bit of a pander to nostalgia of youth – that’s what caused so many of my college friends to have a sudden interest in the Maniacs and Natalie Merchant (who was, even then, preparing to fly solo – and Natalie’s solo work is something I’ve never been able to get into.) And there are several very good songs on this record – I’m thinking specifically of “Circle Dream”, “Noah’s Dove”, and “Eden.” However, there is a problem with this record – at least for me.

The problem is that it is so closely intertwined with the Unplugged CD which I played continuously for a while the following year. And then my college roommate, with whom I shared a close but antagonistic relationship picked up on this CD. And he played it. Non stop. Continously. So much so that I couldn’t stand to listen to it anymore. And plus, it reminds me of that time, feeling bad about myself and being depressed and lonely so it’s with great effort that I still listen to “Because The Night” – the last Maniacs single with Natalie and oddly enough, their most successful. A sad way to end my association with the Maniacs. Last Tuesday, I tried listening to bits of Our Time In Eden which I picked up from the library and it was like I was transported in the Tardis back to those times. It was so unpleasant, that I had to turn it off.

Better luck next time, I guess. Perhaps I’ll let another 15 years go by and see how I do then. In the meantime, I'll be sticking to In My Tribe - it's like a comfortable old friend that knows exactly how to interact with you and you know just what to expect from them.
Posted by Dan at 3/03/2007 10:54:00 AM

Great post!! I too didn't get into Blind Man's Zoo as much as IMT. LOL about being hit over the head with social issues! I felt THE SAME WAY! Even the video for Eat For Two was just a bit over the top for me. I remember my aunt walking in to the room as it played and she was physically revolted by it! Of course, then I was so rebellious and wanted to watch it EVEN MORE! I needed to grow up...d'oh!!

We are so musically twinned!

Your criticsm of Blind Man's Zoo is on the money, though I did like the record. Our Time In Eden is superior though.

I have to admit that I developed a dislike of Natalie during the last years of her higher profile. In interview she came across as overly...didactic. That's the nice term for it. Just very severe. If she was not like that, it was what came out anyway.

I still wonder what went on between her and Michael Stipe. Probably nothing, but...

Anyway, she has lost her voice. Have you heard her recent work? She bleats now in a most unpleasant way. It's like a white elephant in reviews - no one mentions her voice changing.

Y- I had completely forgotten about the video for "Eat For Two" but now that you mention it, I seem to recall it being a bit over the top. I do love that song though, and really hate what they did to it on the Unplugged CD.

XO - I got that impression from various things I'd read about Natalie - that she was very severe and perhaps a bit difficult. Perhaps that's why I never got into her solo stuff. Truth be told, I was cooling to her toward the end of her tenure with the Maniacs anyway.

My introduction to the Maniacs was "Trouble Me," which I love because of Jevetta Steele's backing vocals. I was absolutely obsessed with Blind Man's Zoo because it was the first "socially aware" pop that I had heard; I was a sophomore in North Dakota!

Because I love this disc so much, I was afraid to venture into their past. I am, however, a huge fan of Natalie as a solo artist. I think if you were to listen to "Motherland" and "Ophelia" you'd find a few gems. I won tickets to see her in Cedar Rapids, and I was very impressed.

She certainly isn't engaging as a person, but her stage presence is quite something.