Not ready to make nice? Well, no wonder. 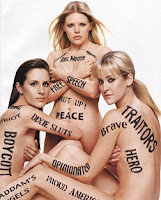 It's 2AM and I've just finished the Dixie Chicks documentary. Holy shit.

There are not words to describe how I feel after watching this movie. I could write reams and reams about the hypocrisy of country radio or whether or not Natalie Maines should have said that she was ashamed that the President of the United States was from Texas. I could even talk a lot about whether the response to the Chicks' music was appropriate or not.

What I do want to talk about is how these three women, while being members of the biggest country band in recent history and are probably wealthy beyond their wildest dreams, are still human beings. The cruelty and hypocrisy that WAS shown by their former fans was unforgivable. The hateful and hurtful things that people said in the name of freedom was appalling. I followed the controversy at the time, but had no idea it was as bad as it was. It's no small wonder that Natalie didn't even want to go back to county radio at all with this record.

Perhaps the hardest part to watch was the part that talked about the death threat that Maines received prior to a Dallas concert. These women were visibly shaken by this and an off-the-cuff remark by an entertainer should not provoke that kind of response in an adult human being. The other part that really got to me was kind of a throwaway moment where a mother was trying to get her toddler to say that the Dixie Chicks suck. I couldn't believe my eyes.

In many ways, we have ourselves to blame. The celebrity culture is thriving today - you can't go even go to reputable mainstream media outlets without being offered a "front row seat for the Britney breakdown." The media was complicit in this - it was a sexy story that had legs and especially when the war was going well in its early stages, the Chicks really looked foolish. But foolish or not, I hope the people that were featured in the documentary disparaging the Chicks look back at this and are ashamed of their behavior. However, I have a strong suspicion that they probably look at it with smug admiration.

What a difference time can make. Vindication is theirs - although don't look for it from country radio.

If I were the Chicks' manager at this point, I would tell country radio to fuck off and record a rock album in the vein of Sheryl Crow (which, really, Taking The Long Way was sonically very similar to a country-flavored Sheryl Crow album) and then do killer dance remixes of their singles for the gay audience--a significant number of which embraced them as their country audience deserted them for the freedom of speech that is part of what is good in America.
Posted by Dan at 3/09/2007 02:14:00 AM

Holy Shit, you did just remake the documentary!! J/k! You know I can't stand these ladies, but you make a great point about being human beings. In a way, I guess if I were in the same situation, I'd prob look back with smug admiration too. I mean, they sorta were right, weren't they? But you are so right about them looking foolish at the time.

I agree that they are pretty much done with country radio. They need to embrace their inner freak and do something a la Sheryl Crow. Obviously, with their CD and "Not Ready To Make Nice" hitting the charts and topping their prior peaks, folks are ready to listen. Maybe just not me...lol..but that's ok too! :)

I am more the reverse - I liked what Natalie said (and thought it was pretty minor). I am a little over the hammering about it since that time. If I were them, I would have launched the CD with "Taking The Long Way" or whatever that amazing song is, and NOT let the 2003 debacle overshadow the art. I don't blame Natalie for disliking country music, but she needs to move on.

I saw them live this summer and they were amazing though. Realllly good - and I only own the new album.

I was in the front row for the "Fly" tour in Moline, and I was absolutely blown away. They really did revolutionize country music for females in the late 90s.

I own all of their albums, and every one is better than the last.

If we stop expecting our pop stars to be revolutionaries, maybe we could get back to the music...