For the love of blogging

I am going to go out on a limb here and say that I really do adore my blog. Not to put out my shoulder while I pat myself on the back, but I am so proud of it. It's something that I have made completely by myself - there are no other authors, and while I have clearly been inspired by others, what I choose to write about is always driven by what I want to write about, not by what I think others want to read. I've been keeping this blog for nearly 4 years now - it'll celebrate it's 4th birthday in September - and there's been a lot of changes in those 4 years. Looking back through the archives, you can see evidence of that. That and discussion of some of the most fucking fabulous music on the planet.

As a blogger, I'm probably not the most interesting writer in the world, nor do I update daily like so many others do. I have a small but die-hard group of readers (hi guys!) and, as Paul from thezapping so frequently says, I'm amazed that there's anyone out there that even reads this stuff, let alone takes the time to comment on it. And for that, I am very grateful. This blog started out as just for me, and then it expanded little by little. And no, it won't ever reach the upper echelons of Technorati or whatever, but I don't really want that anyway.

Blogging has become a very important thing for me - something I think about at various times during the day. Events are deemed blogworthy (sponge-worthy?) or not blogworthy. Some things that are blogworthy never end up being blogged. The ship sails so-to-speak. But I do enjoy being able to write and have a small audience. I journaled for years and years - and I never dreamed that I would do something similar (note: journaling DOES NOT AND SHOULD NOT equal blogging) in such a public forum. Sometimes I get nervous about stuff being on the net for all to read. But mostly, it just keeps you in check - you don't say anything on the blog that you wouldn't say in real life. That's a pretty simple rule. And never ever blog about work in specifics. And sometimes, even generalities could get you in trouble.

Heidi bought me a shirt that I saw on the back of Wil Wheaton's absolutely great book Just A Geek. When I saw him wearing it, I knew I had to have one. Here, have a look (the pic is a bit blurry, but that's life.) Beware if you're around me - you just might end up here. 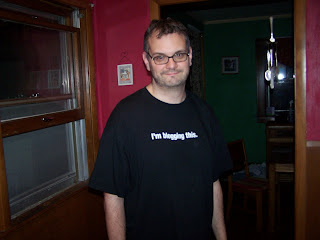 God what a brilliant review you linked to! What sparkly prose!

You know my philosophies on what you have written here. Good for you!

Wow! Your 4 year blogversiary is coming up... that's freakin' excellent dude! I love this blog because you are fearless in the way you share your feelings and ideas.

And I think the avatars are fantasmic! Go Mulder, Go Dr. Who, or if you choose just you, then Go Dan!

Not much could deter me at this point - but I've learned to never say never! Thanks for the kind words - both XO and Yuri - two bloggers who are included in the list of those who have inspired me in my blogging.