...but not of a lovely lady bringing up three very lovely girls. It's the story Anna made up this afternoon with some of the horror/pop culture figures in my basement office. Meet the players. 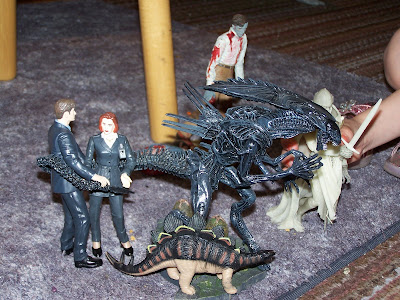 For those of you that need help, from left to right it's Fox Mulder, Dana Scully, a random stegosaurus, the Alien Queen, Flyboy Zombie and the King of the Dead. Notice how Mulder and Scully are ramping up the sexual tension by being wrapped up together by the tail of the Alien Queen.

The story, per Anna, went something like this. Mulder and Scully were trapped in a room filled with these monsters. The stegosaurus was the baby of the Queen Alien, the King of the Dead was blocking one of the exits, and the Nerds that had been spilled on the floor were filled with electricity such that you couldn't touch them without getting shocked. My job was to play Mulder because, of course, I had to be the boy. Mulder was required to negotiate their release from the Alien Queen by talking to the stegosaurus who would then plead with the Queen to release them. This was not about to happen, as the steg was also bad as well. Mulder was shocked by the Nerds several times, but eventually, they escaped back to the office by walking carefully around the Nerds.

Once they got back to the office, there was Flyboy Zombie blocking their way. This was when Anna asked me the question that I've been waiting for..."Daddy, how do you kill a zombie?" Well, my dear, I answered, you shoot them in the brains!! So she tried to do this, but she said that she didn't have enough power (as Scully) so it fell to Mulder. It kind of fit in with the whole Scully-in-jeopardy theme that is prevalent in many X-Files episodes.
Posted by Dan at 5/13/2007 04:16:00 PM

Incidentally, I'm having a marathon that began in February, starting with the pilot.

When Anna goes to grad school (paid for by YOU! ha!) she can do the same thing and call it "Crisis Simulation"!

D'Luv - I am stuck in the midst of Season Three and cannot get going again! I just need to get my act together, I guess.

XO - Anna'll get the same deal I did - my undergrad was paid for, but everything else I did (which was substantial) was on my own dime! :)

We had the same deal!

It was either that or the more canonical "kill the brain, and you kill the ghoul." But I didn't think she was ready for that quite yet. ;)