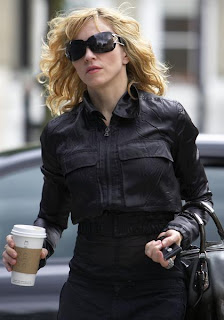 OK, so the album version of "4 Minutes" leaked last week (not that I would download leaks or anything), and I'll be damned but the song is starting to grow on me. However, as I've said before, there are a lot of unsightly things that can grow on you if you're not careful. Thankfully, I don't think that "4 Minutes" is one of those unsightly things. Yes, the (horny) horns are too loud and the production is too much and the attempts at hip-hop whatever reek of "trying too hard." But thanks to a fanmade remix that I found via Matt Rettenmund's blog, I've come to realize that buried underneath all those horns and production, there's really a brilliant pop song with a killer hook. And I never thought I'd live to see the day I'd say this, but Justin Timberlake's presence on the song is actually a plus, and not a minus. And I have to say that the "tick tock tick tock tick tock" part of the song is VERY appealing...a bit of an homage to "Hung Up."

Today, Hard Candy became available for pre-order on iTunes. I, of course, pre-ordered it. There was a regular version and a deluxe version. I opted for the deluxe version because it has some "4 Minutes" remixes that might be complete shit, but what the hell? There is also a bonus track available from iTunes (pre-order only) called "Ring My Bell" and if there is a God up in the heavens, it will be a cover of Anita Ward's 70s disco song. Given that Madonna has recorded very few covers and disco is not the direction she's going on this record, I highly doubt that it will actually be the cover I so desire, but a man can dream right?

I'll admit that I'm getting a bit caught up in the emotion and excitement that is part and parcel with every new Madonna release. Even though my expectations are not quite as high as they have been in the past, it's impossible for me to not plug into everything that surrounds new Madonna.

I'm starting to feel the same excitement - it's hard not to when it is a new Madonna album. Not sure if you have heard the Junkie XL remix of 4 Minutes, but it is absolutely killer - strips Justin's vocals back. Can't wait to hear the Bob Sinclair remixes too - these will definitely bring the song back to a more dance vibe (what we all want from Madge).The song has really grown on me too, but still going to reserve my opinion on the album until I have heard it.

I hate to be a dream crusher, but Ring My Bell isn't a cover of the Anita Ward song :(

I wonder when the album will, hem hem, 'surface' online? I tend to think 7 days before, no earlier.