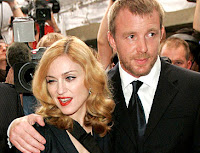 It has been rumored almost since the day they tied the knot, but apparently, it is splitsville for Madonna and Guy Ritchie. I didn't quite believe it when the news broke late last night (the news was being reported by The Sun, after all.) But this morning, The Validator confirmed the demise of their marriage, with a finalized divorce desired by Christmas of this year.

I'm sure no one really gives a shit what I think about it, and my voice will be one more drop in the bucket of a million bloggers talking about Madonna's personal life. But for me, I have always had a hard time with the scrutiny that celebrity marriages are under. When I think about the end of Madonna and Guy Ritchie's marriage, I can't help think about how traumatic the end of a marriage must be. There's the family members and friends that need to be told, the legal machinations that have to happen, not to mention your own emotional upheaval that the dissolution of any intimate relationship, no matter how expected or needed it is, is bound to cause.

Now imagine this intensely personal drama unfolding for everyone to see. Everyone in the world. I can't get my head around that. And add to that those gossip columnists that can't shut up about the impending divorce 5 minutes after the vows are said. It's no wonder successful celebrity marriages are so few and far between. Marriage is difficult enough some days without the scrutiny of everyone with a blog or a camera. Yes, I know that public scrutiny and comment are part of what she signed up for when she decided "to rule the world" but she is also a human being. The fans should know that better than anyone.

I won't pretend to know the intimate details of this marriage dissolution (Madge has not called yet - she'll probably call during the debate. Her timing sucks.) but I can only wish them the best and hope that there is as little trauma to their family as possible. Because even though she's a superstar, this is still a family that is ultimately not all that different from yours or mine. (except for the millions.)
Posted by Dan at 10/15/2008 07:22:00 PM

I was surprised to hear the news, but I am not shocked by it. I"m sure the kids (maybe not Lola so much?) will be devastated. But perhaps, just perhaps, Madgie will take some time off and comeback with a brilliant album in a couple years.

It's always sad when a relationship dies, but it seems like this one's been on life support for a while. Hopefully the kids will be given top consideration.

I'm not sure Madonna comes across as a likeable public figure, but her private life is just that - and it's sad for her, for Guy, for the kids. Miles Away becomes even more poignant, and I'm with Yuri - a year or so off for a comeback album with ace tracks that match the genius of Til Death Do Us Part would be aces. Not that i want her to trade in on her unhappiness, just back to being brilliant.

So after being a little sad for Mo and the family, is it wrong that my immediate thought after that was "Oh... that last divorce gave us Like A Prayer..." ??

I just cannot imagine Madonna doing anything like Hard Mandy (as much as I still adore that) after this.

You know, I'm torn on the whole "maybe this personal tragedy will create great music." My first inclination is to think that, as fans, that's incredibly selfish of us. But upon further examination, it is what we would all hope we could do with a tragedy in our life. That is to say - we would hope we would not be completely wrapped up and lose ourselves in it, but somehow, take the sadness and emotional upheaval and spin it into something brilliant.

So maybe she will. Time will tell. Although I have warmed up a bit to Hard Mandy (thanks to Sticky & Sweet), I don't think we'll see her following trends with the next record. And chances are high that it'll be of the more personal type.