My friend Matt sends out a pop culture trivia question from his desktop calendar to a whole slew of us pretty much every day. I am kind of hit and miss with it, averaging probably 8-10 correct responses each month, but last Thursday's question was right up my alley.

What duo failed to strike gold in 1977, with the album Allman and Woman: Two the Hard Way?

For me, this was completely easy. It was Gregg Allman and Cher - who were married for about 2 minutes in the 70's. That is one of those random bits of odd pop culture that I have ramming around in my head, waiting for its moment in the sun. So when I responded correctly, Matt e-mailed me back saying that he had a sneaking suspicion that I would get that one right. 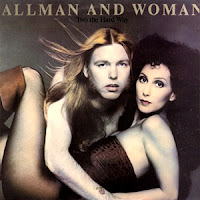 Funny thing though is that I had never actually heard Allman and Woman. I did know that it was pretty much panned by every single critic around so that probably meant it would make my ears bleed. But, true to form, I didn't let something like that stop me and after all it WAS Cher. It is not available on CD, but it is quite readily available around the internet. So it didn't take me long to actually get a copy for my iPod. (An aside: This is the reason that it is completely beyond my comprehension that music goes out of print in this day and age. How hard would it be to slap this up on iTunes? Then they would have had my money.)

How is it? As you might expect, it's not very memorable, but Cher sounds good. Her voice has the timbre of most of her 70s recordings which is kind of a love-it-or-hate-it type quality. He attempts at southern rock are always a bit laughable, but hey, what can you say? Cher has this ability to transcend being bad, because even when she's bad, she's at least campy so you have that as the consolation.

My favorite moment (besides its vaguely Buckingham Nicks-ish album cover) is, hands down, the song "I Found You Love." This is not because it is a standout track musically, lyrically or otherwise. The reason it is so fantastic is because Barbra Streisand also did a version of this song on her Streisand Superman album from 1977 (the Ogilvie home perm gone bad, short white shorts, long tube socks album.) 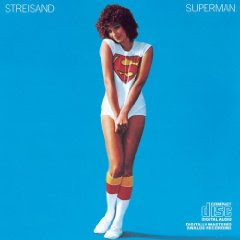 Listening to Gregg and Cher do their version has (predictably) caused me to pull out Streisand Superman which I have not listened to in I-can't-even-tell-you-how-long. I had forgotten how truly bad that album was! Talk about an album that lives up to its bad album cover. Still, I have just finished listening to the whole thing. *sigh* A study in contradictions. Such is my life.

My final thought on Allman and Woman is on its title. Could you even begin to imagine the furor that would result from someone putting out an album titled *So and so* and Woman today? Would that even make it out of committee? For the love of all things holy, I would certainly hope not.

Who knew something as innocuous as a trivia question from a calendar could unleash something like this?

Yeah, it may as well have read "Caveman and Woman" for that matter! I'm surprised Cher even allowed that.

Now you've got me curious...who are you guys dressing as for Halloween?

Like there's any way I'm going to spoil *that* surprise!