I love this picture. Granted it was taken before the divorce was announced, but she seems so happy! 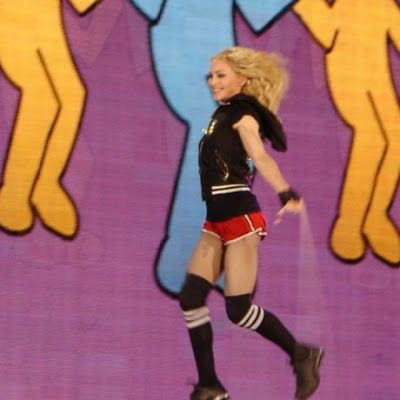 Tomorrow we leave for Chicago for our date with her Madgesty (and we know she will be late for the date.) And in honor of the trip, I wanted to do a small list of essential Madonna songs for me. This is by no means a list of my favorite Madonna songs. Heidi challenged me to do that earlier this summer and, while I'll admit that I tried to do it, I just couldn't whittle it down. It's far easier to pick out the ones I really don't like. But I picked six songs that I seem to always come back to, that no matter how many times I have heard them, never seem to grow old. (links to videos)

1) "Borderline" (from Madonna)
If I had to pick a "favorite Madonna song" I think it would probably be this one. It was the one that brought me into the fold (albeit a couple years after its release.) It is hard for me to nail down exactly what it is about this song that I love so much, but I truly love it. And the video? It was one of Madonna's first capital-B brilliant videos. I am so incredibly pleased that she is performing it on this tour, even though the reviews of the performance of the song have been decidedly mixed. Still, I'm sure it will be a high point of the tour.

2) "Secret" (from Bedtime Stories)
I kind of look at this song as Madonna's mea culpa for the excesses of Erotica and Sex (or perhaps that was "I'll Remember.") While the album Bedtime Stories does not really do much for me, "Secret" has always been a personal favorite of mine. Part of it is the time of my life that it is associated with (late undergrad college years as well as being the first year that I found other Madonna fans on the internet) but the other part of it is the humming. There is something about Madonna humming that is just completely attractive to me. But what really makes it for me in this song is Jeff changing the lyrics to it so that it became "Someone's coming over/I'm making Pop Secret."

3) "Don't Tell Me" (from Music)
"Don't Tell Me" is a rare example of latter-day Madonna getting two chart hits off a single album. What I love about "Don't Tell Me" is how much of a radical departure it was from everything that came before it. Madonna had never done the cowgirl thing and believe it or not it actually worked. A bit of Lynyrd Skynrd and staccato beats (courtesy of Mirwais) thrown into the mix made it just that much better - although it made many wonder if their CD was skipping. It's a pity that it was performed nearly identically on two separate tours. It certainly deserved better. I wouldn't be surprised to see this resurrected on the next tour.

4) "Oh Father" (from Like A Prayer)
I think this is the best of all of Madonna's ballads, bar none. It is also famously, the song that broke her streak of top 10s that started with "Holiday." "Lucky Star." But what does that matter? The song is fucking amazing. I know that many interpret this to be about (duh) her father, but I can see a different interpretation as well. For me, I can see this being about religion and escaping the Catholic god of her upbringing. "Oh Father/If you never wanted to live that way/If you never wanted to hurt me/Why am I running away?" could be about an abusive father or an angry God. Pick your poison, I guess. And this song is a prime example of Madonna's shocking brilliance with music video, and why she practically owned the genre through the early 90s.

5) "Jump" (from Confessions of a Dance Floor)
It is hokey to say so, but I draw a lot of personal strength from this silly dance song. It certainly doesn't hurt that it is such a damn good song that even if you weren't paying attention to the lyrics, you would be hard pressed to get it out of your head. The refrains of "I can make it alone...I can make it alone..." and "there's only so much you can learn in one place/the more that I wait/the more time that I waste" were just spot on for me around the time Confessions was released. And then she went and did it one better by releasing an old-fashioned extended mix that added the Confessions Tour outro. Fantastic. Video? Not so much.

6) "Into The Groove" (from Desperately Seeking Susan)
If you can believe it, this wasn't even a single, even though it was played to death by radio. Madonna vowed in the mid-90s that she would never sing this on tour again. Well, it's on Sticky & Sweet AND the Re-Invention tour set lists, so I guess she's eating those words. Only when I'm dancing can I feel this free/At night, I lock the doors where no one else can see. Who cannot relate to this? If you can't, you probably have no soul. It could be argued that this IS the quintessential Madonna song, eclipsing even "Vogue" and "Like A Virgin" but such a designation is nearly impossible. No remix of this song has ever improved upon the perfection of the original version although I have not heard her take on it for this tour so perhaps I will change my mind.

Great list. I don't have a LOT of songs by her that I would call favorites, but these would be among them.

Anon - you know, I didn't think so either and the source of that confusion came from me misreading a wikipedia article. The post has been corrected.

Great list. Hard to do! I think Live To Tell is my favorite ballad, but Oh Father is such a nice slice of Simon and Garfunkel. I would say Don't Tell Me is one of her smartest songs. The most indie of her pop hits.