Aim for the head

OK, I tried to blog this post earlier today, but as I was about to hit "publish", the lights went out, the computer went out and whoever was singing via iTunes (I think it might have been Celine Dion!) suddenly went quiet. You knew it was going to happen. You don't get a quarter inch of ice and then some in Iowa and not lose power. Admittedly, I didn't take it very well even though I knew that it was bound to happen - I was a bit petulant and irritated and well, not at my best. I went up and took a nap because I hadn't slept well last night and when I woke up, Heidi and Anna decided that we were going to head to Happy Joe's since the power was still not back on. But just as soon as we decided to do that - the power miraculously came back on. So YAY! for that.

We still went to Happy Joe's where Heidi and I ate a whole pizza between the two of us (Anna had her own 4-piece personal pepperoni pizza.) We came back to the house and the power was still on so here I am - about to try to reconstruct the blog post that vanished into the ether earlier tonight.

I went out earlier today to get the mail - not really thinking there'd be anything as really, the weather is not conducive for much of anything except staying indoors. But, amazingly enough, we did have mail and in it, there was a package. And it was for me even! Usually packages we get are for Anna from my mother-in-law of of Heidi from one of her myriad writing friends sending her something random - which she totally loves. But rarely is the package for me. However, today it was!!

I opened it and inside, there was a shirt. I was puzzled - I hadn't ordered anything and to my knowledge, neither had Heidi. It even came from allposters.com - which was even weirder. Anyway, upon closer inspection, it was a Shaun of the Dead T-shirt!! Heidi had found it when she was searching for something and just decided it had to be mine. She knows me waaaaay too well. But I suppose that's for the best, being married to me and all. 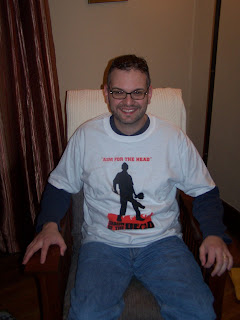 I had to wear it over something long sleeved so as not to freeze my arms off! And on the back, there's a quote "You've got red on you!" which sadly, I don't recall from the movie but that means I'll just have to watch it sooner rather than later. 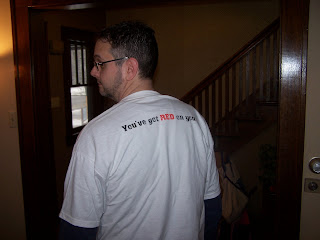 What a day - and just for comparison's sake - here's a shot out the front door taken about an hour ago. 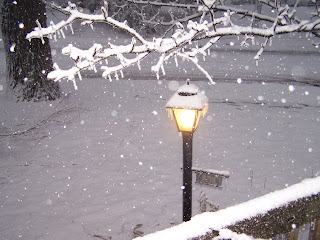 it DOES look like Narnia. So very pretty. Can i visit?? And cool t-shirt, layered with long sleeves is very cool and essential :)

Totally Narnia! :) We don't get snow in Florida so I have no concept of having to deal with that much snow!