I was totally stymied by my scanner this week and so you're going to have to settle for this - one of my favorite pictures of Anna - instead of seeing me in my awkward stage (for those keeping track, it's scheduled to end sometime before 2050.) 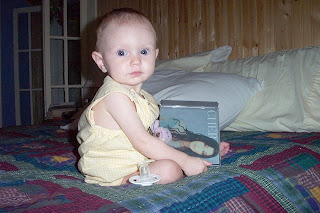 As I said, this has always been one of my favorite pictures of Anna. Yes, it was posed, but the effect is still there. From the very early days, I would watch Cher's Believe Tour on DVD while rocking Anna - either to sleep or just to keep her from wailing at the top of her lungs. She loved the lights and the quick cuts and it really seemed to calm her down. Naturally, as she grew a bit older, she really grew to like Cher. In fact, the very first pop song that I recall Anna singing was "I Found Someone." One day - after we moved to Ames, I'm certain, I caught her singing the "Maybe, baby, maybe, baby" lead up to the chorus. (And what a good bridge that song has! It almost makes me forget it's a Michael Bolton creation.) I wish I had thought to record it. But knowing Anna, if I had made any kind of noise about it, she wouldn't have done it at all.

The inevitable consequence of this early pop song singing (and the indelible mark my genes have made on her) had to have been last night when we were coming back from Cedar Rapids and I had the iPod on. We were listening to the playlist "Dan's Favorites" which has all sorts of stuff on it, but Madge's "Erotica/You Thrill Me (Confessions Tour Version)" came on. Suddenly, from the back seat, I hear "Elonic! Elonic!" followed by a demand to hear the song again once it was over. That's my kid.

When I listen to her singing along with Madge or Cher, I'm immediately taken back to my own childhood, singing along to my mom's 8-tracks and 45s. Those songs really make up a considerable foundation of who I've become - I can remember them as if they were yesterday. I hope that 30 years from now, she'll have similar memories.
Posted by Dan at 2/11/2007 07:07:00 PM

That is brilliant! Elonic! And that picture is sooo cute. Look at her cute baby head.

I don't have a child, but I spent a lot of time with my godson when he was a baby and I can still remember everything about holding him and crawling after him. I used to kiss him on under his chin a lot. Now he is 16 and probably would not be so thrilled about that. But it's hard to let go of the baby version of them. I understand it now at 37!