The end of the week is drawing nigh - which is a good thing despite the fact that we have to spend a good chunk of Saturday in Des Moines at a dance thing for Anna and a vast majority of the day on Sunday doing yard work. I just keep hoping that the weather holds out and we can finally pick up the branches that fell during that ice storm nearly a month ago.

But tonight I took Anna to the library as every Thursday night is "Family Night At The Library." Tonight it was pajama night. All the kids showed up in their pajamas with their 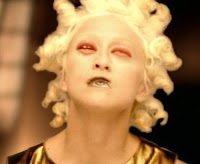 blankets, pillows and stuffed animals. Even the library staff had pajamas on! They read stories about pajamas, going to bed and were going to sing a song akin to "Twinkle, Twinkle, Little Star" but the plans for that were stymied because the wrong CD had been brought so the kids had to settle for "Where Is Thumbkin?" We also did a craft (Hi Jeff, I just used your favorite word!!) which involved writing your own bedtime story. It was a pretty fun. Personally, if I had been running the show, we would have finished the night by viewing the "Bedtime Story" video, but I think the kids might have been scarred for life by Madonna with her face all screwed up. I know I was when the video came out (although the fact that it was her first single since "Burning Up" to completely miss the Top 40 was infinitely more scarring!)

We've been going to Family Night for quite a few weeks now, and it seems like the same people always show up. There's never a huge crowd, mostly hard core library devotees I guess. I see the same people all the time, and yet, I don't know any of their names and I think we'd all rather die than talk to each other. Tonight I stepped outside my comfort zone and actually talked to another dad there tonight - his little boy who was all of 2 years old was running all over the place and had the attention span of a fly. I remember those days well - it's so nice now that Anna's older and I don't feel the need to watch her every move, resting easy in the knowledge that she has at least a few shreds of common sense and won't do anything too insanely stupid. I mean, I'm not so dumb as to think I don't need to keep an eye on her, but the difference between a 2-year-old and a 5-year-old is just amazing. So I struck up this conversation with this other dad, and the cool thing about talking to other dads at a thing like Family Night at the Library is that it's probably the one place where it's not awkward meeting people while carrying a stuffed bunny, a pillow and a Disney Princess blanket. OK, maybe just slightly awkward, but you know what I mean.

Here's the thing - I don't understand why it's so hard for men to talk to each other. And no, I'm not talking about deep, probing conversations, I'm talking about just "hey, how ya doing? My name is Blah Blah Blah, what's yours?" I watch kids interact, with no social programming and they just play together because it comes naturally. I think sometimes that we as adults, and especially as men, have lost that ability but not the need to interact with each other in a similar but distinctly "grown up" way. This guy seemed like a genuinely nice person, but still, having a conversation was not easy. How do people meet each other and start to talk? It does not help that I immediately assume that all other people will have nothing in common with me and think what I like is weird or silly. However, I recognize that as the Four in me - as Stevie Nicks says in "Bombay Sapphires" -- "here I am, dramatic!" - for it's me being an individualist and bearing the unbearable burden of never being understood. Such is the life of a Four.

We talked a little bit about how his son must keep him busy and he did the requisite shock at learning that Anna is only 5 (she looks practically 7 because she's so tall.) We bonded a bit over the shared journey as dads of young children, but beyond that, nothing much. Not that I was expecting anything, but it seemed like a good idea to step outside my comfort zone, to follow in my resolution to be braver and actually strike up a conversation with another person there. I figure, why should Anna have all the fun? Although in the end, I didn't even find out his name, which seems weird in hindsight.

Ultimately, however, I am left feeling a bit melancholy. I have plenty of friends - don't get me wrong - but there are times that I just feel so fundamentally separated from the male gender that it's not a surprise to find that the best male friends I have are on the internet - found through forums that reflect my interests, in a place where revealing you went to a Madonna concert is less likely to get you glares and excitement over the Bananarama remasters is more likely to be appreciated rather than mocked. Too bad they're spread all over this blue marble, but still, I'm glad to have them.
Posted by Dan at 3/29/2007 09:13:00 PM

Man o'man...I forgot how scary Magdie was in that vid! That woulda scared the bejeebus out of my kids! But artistically, it would have been THE video to watch for slumber parties!

It is weird striking up conversations with other dads! I have felt the same awkwardness too, and I don't think I remembered their names when it was all over, either. But they did tell me their name, so it's just my feeble memory that I blame!

So true, so true about forums and blogs...who else gets excited about old Human League songs and remastered 'Nana records? Only the folks I'd prefer to hang with! :)

It IS hard striking up conversations in general, so I find it often happens when I am reacting to something and I make it clear by saying something - and that leads to some conversation. I can't do "Hi! My Name Is Hector McGillicutty!" But I am very chatty once I break the ice.

It sounds like you did a fine job with your friendly interactions! Maybe those dads are dull?! You may not have a lot in common, but finding the points that cross is probably the point. Good for you pushing your comfort zone.

dan..bc here.. some people when i talk to them i just get no connection...which is weird...i think at times they are intimidated by my sexiness and general coolness.. I will tell you one place in my life that this happens that will shock you...i cant stand other dentists..i think that 99% of them are perfectionist, self absorbed, rat turds and when i see them i want to punch them in the god dam face...to me the hardest part of con-ed is that all those other douchbags will fucking be there....dont feel bad..look at it this way..you could have connected and then this guy would call you 10 times a day and want you to come over to his basement..listen to led zep..eat doritos and mountian dew.. and play D&D until you get enough hit points to kill some fucking elf...come to think of it that man may have been zeka...nawwwww..how would he have any kids..

dude, is bc your bro? he's hilarious!

so you're a "four" or whatever--ok. sucks to be you, your "something in common" percentage might be lower than your average nascar-loving, skoal-dipping, wwe-watching redneck iowa dad. oh well. nothing for it but to keep on trying.

btw, during the two years i was at home with baby g, there was a guy that kept trying to get me to come to a stay-at-home dads group he went to. i think they met every week. but since the thought of spending any non-essential time with him made my skin crawl -- our wives worked together, so we only had occasional social interaction -- i took a pass on it. :D