So yesterday, in amongst all the chopping up of wood and raking of leaves and other yard work that needed to be done, I found time to hit the Ames Public Library's twice-a-year (biannual? biennial? I can never remember) book sale. The book sale never fails to crack me up when I go there because there are just piles and piles of books that have been cast off by either the library or community members cleaning out their bookshelves, closets and anywhere else books might find themselves. (Those looking in our house might do well to start under the bed - that's where so many of mine seem to end up.) Anyway, the first day is a four hour "pre-sale" on Friday night where you pay 2 bucks and you can get in early and shop to your heart's content. The rest of the weekend is free admission and Sunday is "half-price day." It used to be "5 bucks a box day" but that was changed for some reason. In any event, people go crazy for this thing - people are scooping up books that I just can't imagine anyone would have a need for. One time, I was standing in line behind a guy that had a Washington, D.C. phone book from 1985. Seriously, when are you EVER going to have occasion to use that? And to what end? It amazes me. People walk out with boxes of books.

I never really find much of anything, although it's a good place to go if you're looking for cheap Stephen King paperbacks which I usually am. I picked up a copy of Nightmares & Dreamscapes yesterday - a collection of short stories that I have not read. It will probably take me two years to get to it considering the size of my to-be-read pile and the fact that I am not reading very fast these days, but still. I also picked up a couple of pulpy sci-fi books based on the Alien movies - Aliens: Earth Hive and Aliens: Nightmare Asylum which will probably be bad and will take me all of two minutes to read, but hey, at least I only paid 50 cents for them. Besides, most loyal readers here know that I can't pass up anything remotely Xenomorph.

But perhaps my biggest find was in the vinyl section of the sale. For sale vinyl at libraries usually consists of bad Christmas albums and generic classical albums. Well, did I ever find a treasure in there - so much so that I audibly gasped when I saw it for I could not believe my eyes. 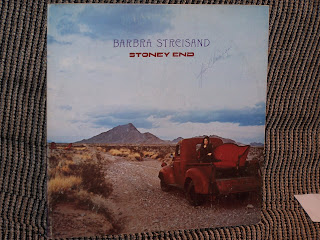 It was a copy of Barbra Streisand's 1971 album Stoney End.

I love this album - it is definitely in my top 5 Streisand albums. It is also another of the quintessentially fall albums in the life of Dan. It has dual memories, as I discovered it in the fall of 1991 via the library, and then rediscovered it the following fall when I bought the CD. The purchase of this CD caused me to put off the purchase of Erotica, even though I had already decided that I wasn't going to run out and buy that album. (what was I thinking??) This album is a much more pop-oriented effort from Babs, leaving behind the lounge numbers and the showtunes, etc. and tackling Laura Nyro, Joni Mitchell and Gordon Lightfoot. OK, so maybe not as much pop as it was folk. Anyway, it marked a big departure for her. And I just love the song "Stoney End" even though I have really no freaking idea what the hell she's singing about.

I blame my parents for my love of this album because it's music very much in the vein of the 5th Dimension (who did a lot of Laura Nyro's songs) and I loved that 8-track when I was a kid. Their Greatest Hits On Earth is the first album that comes to mind when I think of my parents' record collection when I was growing up.

If you look closely at that pictures, you can see someone's name scrawled across the album cover which irked me a bit, but really, I was paying only a dollar for it. One can hardly be picky at that price.

For crying out loud, I have a bunch of Babs vinyl in my store and Stoney End is one of them. Had I known you were in need of it I could have ended your search long ago.
Mario

You don't happen to have a copy of Simply Streisand on vinyl do you? I would LOVE to find a copy of that!!!