Chronicle of a Plague 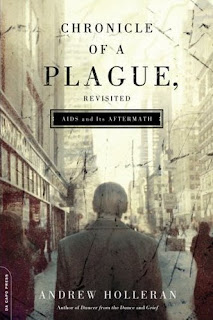 I got one of those Amazon.com e-mails yesterday that I usually trash without even opening. Well, as I was trashing the one from yesterday, I got a fleeting glimpse at the title as it made it's way the garbage. It intrigued me so much I had to go to the trash and open it.

As it turns out, Andrew Holleran is releasing a new book of essays on AIDS, Chronicle of a Plague, Revisited: AIDS and Its Aftermath. Holleran's writings on AIDS are among my favorite, probably second only to Randy Shilts. "Favorite" is kind of the wrong word as that implies that it is enjoyable, light-hearted reading. On the contrary, most of his stuff is quite depressing, as you might expect when writing about the AIDS epidemic.

Holleran wrote Ground Zero, which I have read and now, based on this book might have to pull out again. Published in 1988, it contains essays regarding the AIDS epidemic at the height of its devastation. In many ways, it's like reading horror fiction, only this time, it's not fiction. He also wrote Dancer From The Dance, which I think is pretty much considered to be a post-Stonewall classic in gay fiction. It chronicles the life and times of the gay community in the mid to late 70s, just prior to the ravages of AIDS.

I have blogged this before but it bears repeating: Dancer From the Dance and its companion novel Grief are the bookends to the horrific middle depicted in Randy Shilts' And The Band Played On. I will be picking this up once it is released, but it'll probably have to wait until the economic stimulus package comes.