NYC: Crash into the ocean

Traveling to NYC took care of one deficiency that has been bothering me a lot recently.

I am nearly 36 years old and until just a week ago, I had never seen the ocean. Sure, I'd been to Chicago and seen Lake Michigan which gives much the same effect (i.e., you can't see the other side of it) but it was a pretty sorry substitute. Even seeing the ocean in New York Harbor is not the same as the view of the ocean that spreads out in front of you as far as you can see. We figured that it was pretty silly to get so close and not go.

So one afternoon, we all piled on the subway and headed out to Coney Island. This was not before we ended up heading north rather than south and took a detour at the Queensboro Plaza subway stop. Once we were heading in the right direction, it took about a half an hour of riding to get to the tip of Brooklyn. It was an interesting trip in its own right because a good 50% of the ride is actually above ground. The subway went through some areas that I would consider to be less than desirable, but hey, it's New York and not everything is 5th Avenue ("Number One, 5th Avenue!") A parallel subway takes you to Bay Ridge, Brooklyn, which is the setting for a good chunk of Saturday Night Fever. Next time.

Anyway, we got out at Coney Island and what I didn't realize is that there was going to be a beach there. Well, I was not about to miss the opportunity to take off my shoes and socks, roll up my jeans (it's 1986 all over again!) and get my feet wet. So I did. 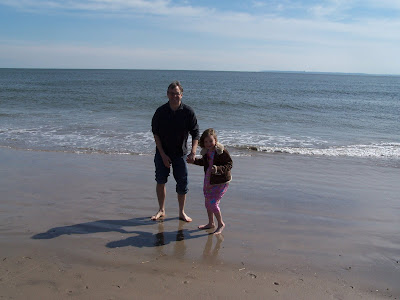 Let me tell you, that water was freezing. We even got this video.

But what was the best is that despite the cold, Anna loved the water. I kidded that she was reenacting the "Cherish" video, which should be pretty apparent by these photos. 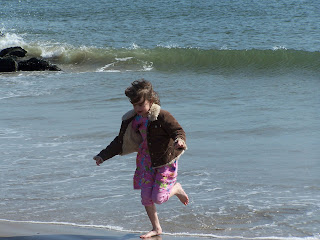 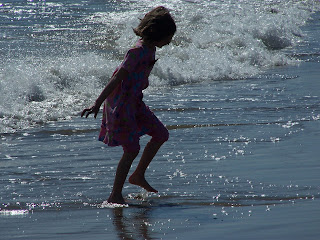 Paul's "cryptic hint" has thrown me off from what I had planned to comment on here.

I bet you guys were freezing, but you can tell you both were having a blast! Good for you!

Brilliant. Love Anna's squealing delight with the whole thing. The ocean is such a calming place - I have not been for quite some time. My favorite time is like 6 oclock when everyone has gone home and you are more alone out there, as you guys were at Coney Island. I hope you can take a beach vacation in the coming years!